On the Beet with Faded Paper Figures 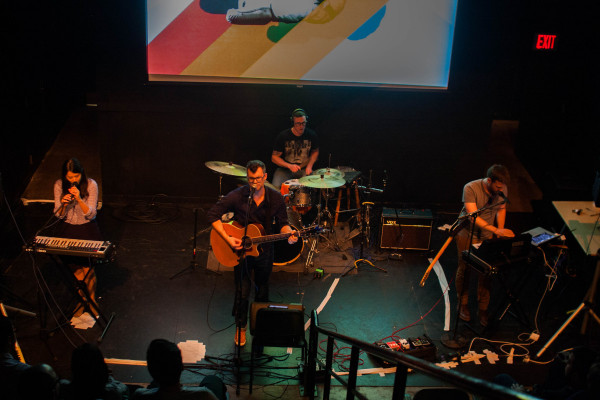 We recently caught synthpop artists Faded Paper Figures on their first ever East Coast tour. This was a pretty big deal, considering they’ve been kicking it for seven years now; continually putting out great music all the while. They were nice enough to answer a few questions for us upon its conclusion. Check out some photography from their Yale gig, an album stream of their fourth album, Relics (did you see their music video for “Breathing” yet?), and the interview below.

Neat Beet: It was great finally getting to see you perform here. How did you plan out your itinerary and practice?

FPF: It was a bit crazy, mainly because we can’t actually practice until we’re all in the same room together, which couldn’t happen until a few days before our first gig.  We did all try to practice individually before that, but it was an intense few days as we all got familiar again with these songs.  Luckily, because our first gig was at Yale, they put us up and gave us a practice room to use before we played on campus, which was extremely helpful.  As far as the itinerary, once we knew we were headed to CMJ in New York, we thought we might as well hit as many other spots as we could in that one week, so we did three shows on campus at Yale (with a huge thanks to them for bringing us out), one in Boston, and then hit Utah before a final show last night in Los Angeles.

Neat Beet: Did you intend for your NYC show to intersect with CMJ? How did you find your experience participating in it?

FPF: Yeah, CMJ was the main reason for us being there.  We’d been invited to participate in a showcase at the Bowery Electric, and it happened to coincide with Heather’s week off work, so it all sort of fell into place after that.   Unfortunately, aside from the day of our own show, we didn’t have much opportunity to visit other venues or events connected with CMJ (we basically played our set and then had to catch a flight), but it was truly awesome interacting with as many bands as we did.  It’s natural to worry, I suppose, that when you join up with a thousand other bands you’ll feel like just another brick in the wall, but what we ended up feeling was this wonderful, collective solidarity with all these other great musicians.  And the crowd was positively amazing, it seemed almost impossible that so many people had come to hear us.

Neat Beet: I saw a great reaction to the Relics tracks performed here at Bowery Electric (We heard “Breathing”, “Not the End of the World”, and “Spare Me”). Which would have been next to make the cut?

FPF: In terms of live performances? Maybe “Wake Up Dead,” “Real Lies,” or even “What You See,” all of which we’d love to perform live.

Neat Beet: How’d you come to join forces with Kurt Deninger, your drummer for this tour (and past ones)? I was really happy with his output.

FPF: Kurt actually came to our very first show at the Viper Room in Los Angeles in 2009, where we were playing (probably not very successfully) with electronic drums.  He just basically volunteered, and then the next year when we released New Medium and wanted to do some shows, we called him up and he’s been basically “on call” for us ever since.  It’s hard to imagine playing live without him now–not only because he’s such an amazing drummer, but also because he’s such a great comrade.

Neat Beet: What sort of electronic equipment goes into the FPF recording process and how do you get those sounds portable? I remember Kael mentioning some cool, rare items in his collection he couldn’t bring on tour.

FPF (Kael): On tour we were using a lot of software patches and creative routing in order to reproduce as many sounds as we could. In my studio in LA I use all sorts of analog and vintage goodies like a Roland Jupiter4, Oberheims, Korgs, Moogs, etc… But those are big, expensive, and hard to travel with. So I spent a weekend sampling most of the patches used in the songs we planned to perform. For example, I recorded the Korg Polysix used for the basslines of “Breathing” note by note, sampling every note of the keyboard one at a time. I then loaded all these sounds into samplers and built a system in Logic that lets me switch patches on the fly. That way I was able to bring only a small midi controller while having access to an entire room full of analog gear.

Neat Beet: Right from the get go, you decided to release all of your music independently via your own imprint, Shorthand Records. What inspired that decision and how has it worked out for you?

FPF: At the time, we honestly had no idea that we’d be making a whole side-career out of it, so it felt like the only option that made sense.  Fairly soon out of the gate, though, we were having conversations with some pretty big labels, most of whom sounded interested but skeptical that we wouldn’t commit to grueling months-long touring schedules.  But because we all have independent careers that we love (and that are fairly time intensive), we knew we’d have to forge a path outside the big-label way of doing things.  And in truth, it’s turned out to be the best decision we could have made.  We have a lot of musician friends who have signed with labels, and (without getting too specific here), our conversations with them have only further convinced us that we’ve done the right thing.  So yes, having come this far, we’re super happy we’ve maintained control over the process.

Neat Beet: What sort of literature are y’all reading these days? I can’t help but notice FPF’s myriad references to classic authors.

Neat Beet: What musical inspirations do you draw from? Have they changed between Dynamo and Relics?

FPF: They’ve evolved with the times, certainly, although from the beginning we’ve drawn inspirations from many of the classic synth- and indie-alternative bands (Depeche Mode, New Order, Morrissey, Radiohead).  When we recorded Dynamo we were listening to a lot of Pinback and Postal Service, and we’ve since then drawn great inspiration from current acts like St. Vincent, Crystal Castles, Phantogram, M83, and on and on.

Neat Beet: I’ve always wondered about the creature that is on the cover of The Matter. What’s its story?

FPF: That’s entirely the invention of the artist Deth P. Sun. Somehow, back when we were looking for art for The Matter, we stumbled across a blog with his work on it, and just really loved that piece (it seemed to capture all the stylistic darkness and mystery we’d been trying to create on the album).  Unfortunately, the original painting he’d already sold, so we were worried we might not be able to use it.  But Deth actually painted a whole new version of it just for us, which is hanging on the wall of John’s home in Connecticut.

Neat Beet: What are your plans for the future with your tour concluded?

FPF: We plan to release a track that we wrote as part of the Relics sessions but are saving for an EP with some interesting remixes and covers.  That should come out sometime this fall as well.  Other than that, we’re going to take some time to just relax and catch up.  The last year was a pretty intense whirlwind in finishing Relics and touring, so we all need to catch our breath a bit.  Still, we do feel bad we didn’t make it to a lot of cities we’d have liked to play (San Francisco? Chicago? Seattle?), so perhaps if the right opportunity comes up we might fly somewhere over a weekend for a gig.  We also have some half-finished videos for some other songs on Relics, so those might be somewhere on the horizon.  For now, though, it’s time to rest, get back to regular work, enjoy time with our families, and just tinker around with the guitar in case inspiration strikes for something new.

Neat Beet: What counsel would you offer to artists beginning their journeys today?

FPF: Run from clichés!  Never write a song where you cry onto your napkin and then translate that directly into lyrics.  You will be so much more pleased with the work if you take some time to craft those thoughts into something complex and interesting.  Also, always give money to buskers.