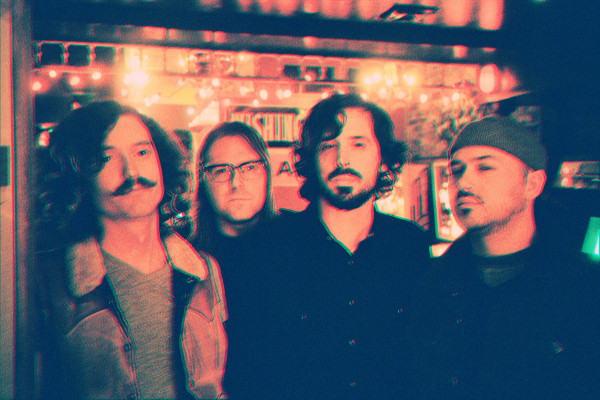 Take atmospheric ebbs and flows, sprinkle in a heavy dose of distorted hard rock solos and continuous unrelenting rhythm section and you have all the ingredients for a Monsoon Season. This, being the first feature length studio album from the band Biblical, who is now on tour promoting their latest work. Their dynamic, energetic and rich sound have garnered praise from fans and critics alike. We  had a chance to catch up with Nick Sewell (bass/vocals), to answer a few questions and let us dive deeper in to the creative process and various influences of Biblical.

Biblical is touring as a supporting act to Death From Above 1979 and will be preforming live at Terminal 5 in Manhattan on November 28th. Make sure to check out the entire photography spread after the show as well, right here on Neat Beet!

Neat Beet: Nick Sewell (Vocals/Bass) and Andrew Scott (Guitar/Organ) have both collaborated with Sebastien Grainger (drummer/vocalist for DFA) on some of his solo work as members of “Sebastien Grainger and the Mountains.” How does this play into the dynamic between the bands on tour?

We go way back with Sebastien and Jesse. As well as playing in The Mountains, Andrew was also in Femme Fatale, Jesse and Seb’s pre-DFA band. So as far as touring goes, we’ll all old friends who enjoy hanging out and goofing on stuff.

Neat Beet: How did you get the opportunity to open for Death From Above 1979? Did Sebastien Grainger personally seek you guys out?

Both Seb and Jesse have been big supporters of Biblical from the beginning. They’ve invited us out several times for opening slots, so this seemed like a natural fit. Beyond digging our band, it’s nice to travel with people you’re actually cool with spending time with. A month on the road would be a long time if there was friction, so I think it’s partially a case of ‘who will we not mind seeing every day?’

Neat Beet: What were the forces that brought the remaining members of the band, M. Mclaren (Guitar/Vocals) and J. Anderson (Drums) together to work in Biblical?

Although Andrew and I played together for a few years, it was actually Jay and Matt that initially brought the band together. In 2009, I was kind of bumming around town, not really playing. Jay suggested I stop by their practice space to hang out, drink beer and make some noise. We did that for a few months without any real intention of having it be a band. By the spring of 2010, we had worked out some tunes, chosen a name and started playing shows. It was a really nice way to start a project: very natural.

Neat Beet: How long did it take to assemble the tracks for Monsoon Season? Was there any inspiration behind the album as a whole?

Monsoon came together in fits and starts. We didn’t have any kind of budget to make it, so it was a case of an initial volley of work to get the beds done and then pick off the overdubs when we could. The guitars were all recorded in either our practice space (an unheated garage in the dead of winter) or a small jam room beneath the guitar shop where Andrew works. While it sounds pretty ghetto, those situations resulted in some really creative problem solving that helped shape the record.

In terms of inspiration, that record was born out of a turbulent time in my life. Over a period of about 5 years, cancer hit my family really hard. My Dad got it and so did my step Dad. While my Dad thankfully pulled through, my step Dad regrettably did not. Shortly thereafter, my wife and I suffered a miscarriage. Monsoon Season became my shorthand for those difficult years. I tried to pack the record with as much of those feelings as I could.

Neat Beet: Monsoon Season is a more refined and cleaner produced take from your earlier work. Who did you work with to get this updated sound?

As I said, the record was recorded with very modest means. Credit for the sound goes to Mr. Matt DeMatteo for an incredible job mixing the album. Not only did he mix, he also lent us gear and provided general guidance about the recording. I think it’s fair to say that he was absolutely instrumental in having the record turn out as it did.

Neat Beet: How do you guys like working with New Damage Records? And where was this particular album recorded?

New Damage have been great. They’re super enthusiastic and have said yes to virtually every bat shit crazy idea we’ve approached them with!

We recorded the bed tracks at a Toronto studio called Candle Recording with another Sebastien & The Mountains alumnus Leon Taheny. They have an amazing drum room and it really created the bedrock of the album for us to build on.

Neat Beet: Your music blends fantastic atmospheric soundscapes with pumping hard rock riffs, who were some of your main influences?

Certainly as a guitar band, the standard 70s influences all apply. But we’re much more interested in how to augment those sounds by stirring in some different flavors. For Monsoon, we were looking to 60s soundtrack stuff like David Axelrod and Ennio Morricone. We were really interested in juxtaposing moments of bombast with more space. A heavy part hits that much harder when you let things quiet down first.

It’s like the tide comes in and fills the mix, but then it goes out and we see what washed on the beach.

Neat Beet: Andrew: Who are some of your main influences for the epic solos on these tracks? What is your approach to finding the right nerve to strike?

The solos are all Matt ‘The Age of McLarius’ Mclaren. I can’t speak specifically to what he was thinking, but I know Wayne Kramer and Fred Smith from the MC5 are his faves for rock guitar.

In terms of choosing the right nerve, I think our guiding principle was always to seek contrast between the various elements. So loud / soft, rough / smooth etc. I think it adds up to a more rewarding listen.

Neat Beet: How do you prepare for each performance?

We don’t have any specific ritual really. More often than not – especially on a bigger tour – it’s basically go time and you just walk out and turn it on. That said, no matter how crappy I’m feeling, whether I’m bummed out or sick or hung-over, when it’s time to throw down, it’s on.

Neat Beet: A common occurrence in large scale tours is the blending and adaptation of live performance elements between acts. Have you seen any aspects from Death From Above crossing into your live show, or vice versa?

Interesting that you mention that. One of things we’ve incorporated this tour is a sample pad. DFA always had really cool transitions between songs with weird loops and snippets from movies and such. That’s something we’ve added for between songs now too.

As far as us influencing them? I’m not sure. Certainly, we’re pretty free form in our arrangements and we let things go as long as they need to. This tour they’ve been riding stuff out to, but whether that’s us rubbing off on them, I can’t say.

Neat Beet: You guys are known for your epic live performances, any new show stopping features to look out for on this tour?

I think people familiar with the record will appreciate how the songs open up live. We’ve really tried capture and heighten the dynamics of the recordings and maximize them. So when the riffs are big, they’re gargantuan. But things settle down, you can almost hear a pin drop.

Neat Beet: How do you expect Terminal 5 to stack up to your most memorable spots on tour?

I played Terminal 5 in 2009 and I’m super stoked to get back! This tour has been a whirlwind of cities and venues, but playing a nice big room in the heart of Manhattan is something I’m looking forward to immensely.

Neat Beet: Are you guys writing any new material while on tour, or will that be saved for a time with a less hectic schedule? Will you be debuting any new tracks at this show?

We’ve been working on demos for the new record, but right now our focus is on honing and performing the songs from Monsoon into the best live versions we can.

As we discovered last time, it’s beneficial to let a record to take its own shape. You can plan and plan as much as you like, but allowing room for things to take shape as they will has always yielded the best results for us. Forcing this often ends up in disappointment.