On The Beet with Bent Denim 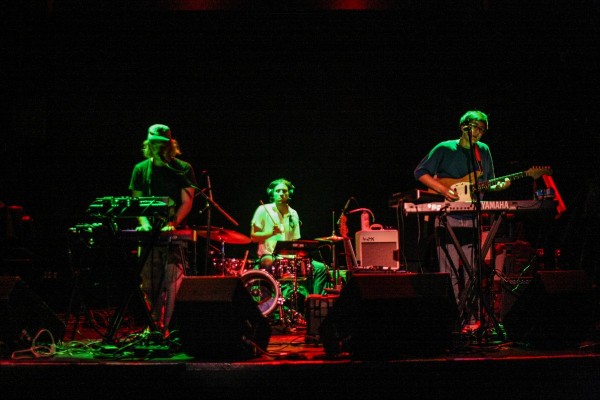 Bent Denim are one of our fav duos here on Neat Beet, us having become proper fans after catching them touring last year around the release of their debut EP, Epistolary. They recently released a first album, Romances You, that continues their moody, electronica drenched style of pop music that can really sink a hook into you. We caught up with them for a chat about what they’re up to, which you can see below along with a stream of their latest works.

Ben Littlejohn: Dennis and I grew up a few blocks away from each other. The first time I met Dennis I actually made him cry. we were all throwing dirt clods at each other in a vacant lot and I threw a clod that had a rock in it on accident and hit Dennis in the head. He ended up having to get walked home while crying.

Neat Beet: What do you use for the electronic sounds that permeate your music?

Ben: My mom is an antique dealer and I spent a lot my years growing up going to antique malls, thrift stores, & flea markets. Most of the electronic sounds heard in our music come from quirky instruments found while looking for things for her business.

Neat Beet: You’re a duo, but get some percussion live. Who joins you on stage?

Ben: My brother, Chris, joins us when he can. It’s nice because it’s hard for him to say no or it would make family holidays awkward.

Neat Beet: How did y’all get to be bros with Young & Sick? You’ve toured with him and he’s now done the cover art for both Epistolary and Romances You.

Dennis Sager: Our manager, Connor, worked with Nick’s manager Aaron during undergrad at Tulane on the campus concert production team years ago. So we’ve gotten to watch Nick’s artwork and music career blow up. They heard the demos of what ended up being Epistolary, and Nick provided some killer artwork, and then again for Romances You. Everything just kinda worked out really nicely and we were able to spend the majority of summer 2014 on the road with them and it was wonderful. Nick is really one of the most amazing and hardest working humans I’ve ever met. We are very indebted to him for all that he has done for us.

Neat Beet: Scrutinizing those covers, I see that both have floral themes. Would you say that they’re a part of Bent Denim’s aesthetic? If so, what input do you have for us on that?

Dennis: Flowers are an image and metaphor that comes up very often in my writing, and Nick definitely got that when creating the artwork. There’s wonderful line written by my favorite poet Jeffrey McDaniel that goes:

There’s something incredibly honest about trees in winter, how they’re experts at letting things go.

I think of this often. We buy flowers for others just to watch them die, and there is something insanely beautiful in that. I think a decaying bouquet is just as if not more aesthetically pleasing than when it’s fresh from the florists. It’s a bit barbaric, decapitating the roots of something value as attractive and just watching it wilt away. The Dutch master painters so often depicted the flower as a sign of life, and a reminder of how quickly it can diminish. There’s also such a machismo attitude in western culture that women are delicate flowers -damsel in distress- that must protect them form this and that. It’s a totally dated concept but is extremely ingrained in literature and culture. These are things I spend time pondering.

Neat Beet: I recently was obsessed with the first season of True Detective, do you think it does an accurate depiction of Louisiana/The South?

Dennis: We were very into True Detective as well! The South is such a larger than life thing. There are no borders, it does not start here nor end there. I don’t exactly know how well it plays out in it’s depiction of the South, but it does do a great job depicting Southern Louisiana. It’s a very very old place with many many different European, Latin American and African influences.  The series was so visually accurate because it was filmed in the places where the story took place. I’ve lived in New Orleans for six years now and it has become the ‘Hollywood of the South’ It was very entertaining to watch all the retail stores and bars you recognize, and just stretches of I-10 that you swear you’ve seen before. The culture and geography are characters in themselves, so setting any type story here is extremely rewarding.

Neat Beet: In between Epistolary and Romances You, the two of you put out a covers EP, Derivative Works. Your rework of Taylor Swift’s “Shake it Off” got some particular traction. What led you to work with that track?

Ben: My mom is a huge Taylor Swift fan. She kept talking about how much she loved “Shake it Off.” While I was working on a couple of other songs for Derivative Works, I decided to finally check it out. Obviously, I didn’t wanna say, “haters gonna hate,” so I made the prechorus the chorus.

Neat Beet: How did you come to work with Travelers Insurance / Bored Room Productions for the video on “Good Night’s Sleep?”

Bent Denim: We met them through shows/life in Nola, then did a live video shoot thingy with them that turned out really great. They are really nice people and do excellent work. They did an amazing job with the “Good Night’s Sleep” video.

Neat Beet: What’s up for Bent Denim this Summer?

Dennis: We’re doing a string of dates in August, and basically starting on the next record.