On the Beet: Unbuttoned 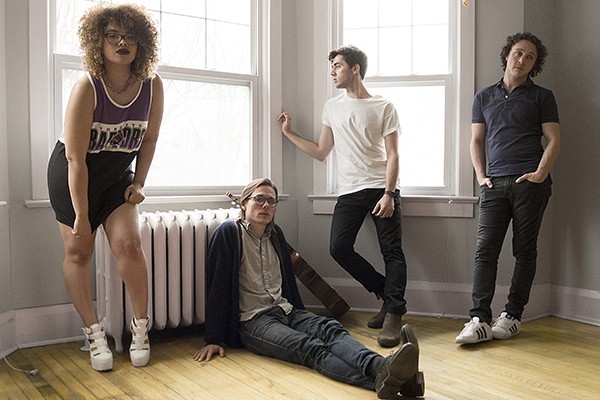 If one were to ask me who I’ve been listening to the most obsessively the past three months, I’d point them toward Toronto’s Unbuttoned. The quartet have been putting out sublime R&B tracks that pulse with energy and emotion. Their latest record, Planes, came out during Summer of 2014 and hooked my ears as soon as it crossed my path. The band was gracious enough to answer some burning questions, and we look forward to seeing what comes from them next.

Neat Beet: I’m e-mailing from Brooklyn right now. “Call Me from Brooklyn” is a sharp number off the record, do any of y’all have a personal affiliation with the city?

Casey Manierka-Quaile (vocals, keys): I find I romanticize a lot of places I’ve never been too and I imagine more often than not it doesn’t live up to the hype that one perceives initially. Brooklyn to me, like many other places was more an idea that I could live freely without judgement of relationships I’ve previously developed. A chance to restart in a new location. I’ve been to Brooklyn a couple times now though, it’s nice.

Alexei Orechin (guitar): Only through music, and that’s as personal as it gets. It’s still the place I look towards to challenge myself as a musician and always get inspired by what I hear my friends doing in the city

Neat Beet: We’re curious to the variety of your vocal styles. Did you experiment to find each song’s techniques or did you plan them out?

Kamilah Apong (vocals, keys): Nothing was truly ‘planned’ on my part. I’m definitely still exploring. You ain’t heard nothing yet, which is exciting to say.

Casey: I would say subconsciously I experimented with multiple styles of singing but it’s never been a case of how do I sound, like this or that. When I initially started singing, I was always worried about just having a sound that is strong and smooth. As I became more confident, I found myself exploring tones of my voice and letting the sound be more spontaneous, endowing the song with what I think will best support the overall texture and moment of that particular piece.

Neat Beet: Is there a story or concept behind the title of Planes? You mention paper airplanes in the song “Suitcases.”

Alexei: Depth in layers, like fractals, only through sound.

Miles Gibbons (drums): Planes is a multifaceted word… it could mean a surface, literally or metaphorically. It could mean another dimension of existence. It could be referencing the vehicle. All of those themes and concepts seemed to be relevant to the songs and lyrics at hand. I personally like the idea that the album name, can mean different things to anyone who listens, depending on their state of mind or interpretation of the music.

Casey: Planes to me was asking for an escape route. The album in general makes consistent references to various locations and departures. It was a period in my life where I felt that I couldn’t be happy in the places I was in. Mostly because I wasn’t comfortable with my sexuality or more so defining it to others and it terrified me at the time. Sometimes it still does but I personally found you learn to adjust given what other circumstance you are in. The paper airplanes reference was a wish to communicate to someone I had recently met and confided with and sort of had high hopes that we’d be able to work out some sort of relationship that never was.

Neat Beet: You have a couple stellar studio videos up on a Polish music news site, Soulbowl. How did those come about?

kamilah: Thanks! soulbowl is stupid rad and supports us in big ways. until we get there (which i think will be in the nearish future) we made some studio videos to send their way.

Casey: We’ve connected with Soulbowl over the last couple years since we dropped Electric Kingdom in 2012. They had brought up the idea of having us involved in these studio session series they were beginning and it was great timing for us because we were just looking to drop some live studio material.

Neat Beet: You’ve released all your material independently thus far. Do you have any strategies to expand the reach of your music for your next release?

Casey: We’re always trying to figure out new ways to have our music be reached on bigger platforms and connecting with bigger audience, but I also believe that as we continue to make honest music and push for it that over time it will connect with more and more people.

Kamilah: Strategy: continue hustling, head down, stay on our shit, and stay true. If the art is true, that is all that matters.

Alexei: If we can spread our music out to as many points on the globe as we can without a conglomerate label, then that would be great. It seems as though the major labels of today are scrambling a little to regain complete control of the work of the artist ever since social media came into effect. I like watching that, and enjoy the grassroots method, the music breathes of our effort, and not to say the quality will diminish if we ever get picked up, but the longer we represent it ourselves, the more power we will have come bargaining time.

Neat Beet: You were five, but recently became four; how will the band move forward following bassist Jonathan Milner’s departure?

Alexei: There is a lot more clarity and focus. At present, we are busy with writing and recording and the process is very fluid. The right bassist will come along when the time is right, we are not at all concerned with that at the moment, Casey is holding it down with the left hand bass for the live show and I can track the live stuff.

Casey: I’ve known Jonathan since high school and we have really seen each other grow up in what I imagine to be pretty important formative years. He’s an amazing creative artist that continues to evolve. Unbuttoned as a four piece is in a very trusting time. All four of us are really putting everything we have in to Unbuttoned and making it our entire life and career and it’s all because of the music that we want people to hear. Nothing can really hold us down at this point.

Miles: Fortunately, I can still call Jon a good friend. There was a slight adjustment in terms of performing the older music with less instrumentation, but the dynamic and writing has evolved seamlessly, and brought us to an exciting time, musically and professionally.

Kamilah: As i said earlier, stay true to the art and keep it real at all times. Hustle game on fleek.