On the Beet, On the Roof: Young Bugs 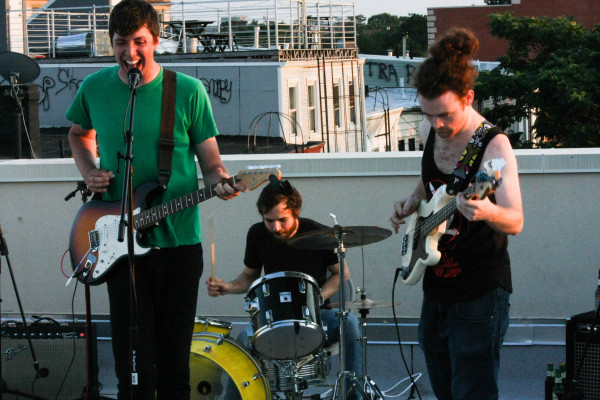 Brooklyn’s Young Bugs are a nascent trio of musicians from the NY area. Those that know them follow them for their penchant of blasting out sweaty and loud rock music anywhere and everywhere they can. They play regularly around the Bushwick area, and were part of a special rooftop show earlier this Summer which was turned into a live video. I caught up with Dylan Treadwell of the band for a quick interview.

Neat Beet: Who are the Young Bugs? How long have y’all been playing together?

Dylan Treadwell: We Young Bugs are Dylan, Dorian, and Quinn. We’ve been a band for about a year now, but Quinn and I have been playing together since about 2010.

NB: What’s the source of your name? Are you budding entomologists?

DT: The deal with the name is that we’re the Crosby, Stills, and Nash of our time, but there’s no Neil Young. That’s why we’re Young Bugs.

NB: We’re fans of your energetic, analog approach to rock music. What are your influences?

DT: Those are pretty hard to winnow down. There’s definitely some Television involved, and Yo La Tengo. Maybe a bit of Guided By Voices.

NB: I see that Quinn and yourself often exchange vocalist roles and instruments. How do you find a balance in that, and how does the songwriting approach work?

DT: With a few exceptions, we both bring in mostly completed songs to rehearsal and flesh them out with the band. Whoever wrote the song sings it. Because Quinn’s so prolific, and my songs can take a bit longer to get together in rehearsal, we tend to have more of his ready to play at any given time. The scales are definitely tipped in his direction.

NB: Your live video on that Bushwick roof is pretty cool. How was that experience?

DT: It was really wonderful. Our friend, Dan Nosal, got together a whole horde of video professionals, and sort of just let us have at it on his roof. He’s done a ton of work to get it all edited together, and we’re very pleased with the final product.

NB: Are you planning any EP or LP releases in the coming months?

DT: We’re planning on recording at some point in the near future, we’re just not settled on when or where. Or how or what, either, I guess. We’re pretty much on the same page as far as why. We’ve got quite a few songs just asking to be recorded.

NB: Where will you be playing next?

DT: It looks like we’ve got a show lined up at The Trash Bar on October 13th with our friends in Jesus Jim. It’s a holiday Monday so we will be fully rested and adequately prepared to rock.