On the Beet: Jenny Bapst 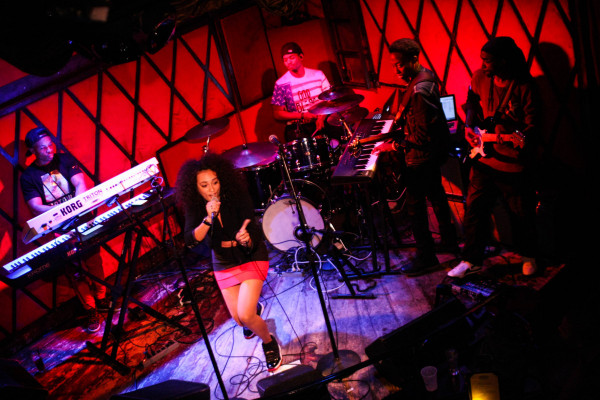 I stopped by Rockwood Music Hall recently to catch Jenny Bapst in performance. The French-American pop singer recently released an energetic new album, Allez. Her live rendition featured a full band backing up her vocals and dance. I took the opportunity to ask Jenny a few questions about her music and inspirations, which you can catch below along with a gallery of the performance!

Neat Beet: “Allez!” I love how everyone shouted that out for each of your songs. Is that a tradition at all of your shows?

It kind of is! I teach the crowd to say ‘Allez’ which means “Let’s Go” in French! It’s similar to a party anthem and can be a motivational word in France.

Neat Beet: The band you play with live are a solid group. How did you connect with all of them?

We actually met a couple of months ago during a showcase I was doing. They really liked my performance and asked to work with me. We have a great connection.

Neat Beet: How does your songwriting process work? Do you collaborate with others or record alone?

I usually get inspired right away when I hear a song and I start mumbling a melody with a couple words. Working out the melody always comes first and then the lyrics. Sometimes I write alone, but I also love to collaborate and exchange ideas. This also helps since English is not my first language.

Neat Beet: What are the biggest differences you see culturally between the USA & France? Favorites about each?

Hard question since there are so many differences. The biggest difference I would say is that the French like to live in the moment and Americans like to plan ahead for the future. However, I like that Americans are open-minded and have a great work ethic. My favorite things about France are the cultural traditions we have, such as enjoying the little things and the food! I’m lucky to have the best of both worlds!

Neat Beet: What inspired you to pursue music as a creative outlet and profession?

My grandfather was a rhythm and blues singer with a big career in Europe (even though he was American). I’ve always had music in my blood. I realized I wanted to create music at a young age because I couldn’t imagine my world without it! Music is my joy, my pain, my motivation. It is the first thing I turn on and the last thing I turn off. I gained the confidence I needed when I sang “Happy Birthday” to Stevie Wonder who told me I should do something with my music. That’s when it all began.

Neat Beet: Your bio mentions your hoop dreams before striking it as a model and musician. Do you ever play anymore?

Yes! Basketball is my second passion. As a kid, I wanted to be the first girl in the NBA…I still play for fun about once a week and do tournaments here and there.