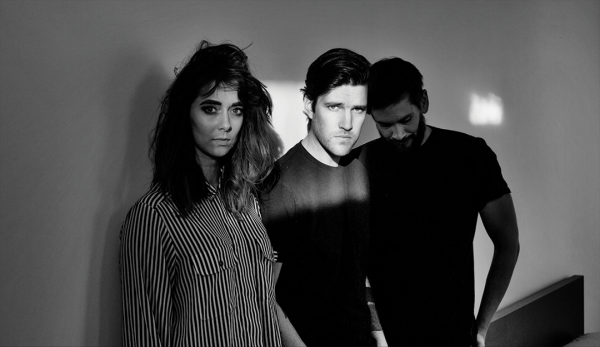 Out of Minnesota hails one of our favorite rock trios, ON AN ON. The band finds their niche in melodious and melancholic electronic rock. They released their second album, earlier this Summer, And The Wave Has Two Sides…, and are now on tour supporting its virtues. They are playing two shows here in NYC, one sold out due to the BØRNS supremacy (the 16th at Mercury Lounge), and another gig headlining Baby’s All Right. Beeters in CT and Boston have their own potential dates this weekend.

ATWHTS… is a very lugubrious effort. Murky gloom surrounds it from opening to closing, punctuated by treasured, uptempo moments of optimism. If you can find yourself floating on those dark clouds, this may be the record for you, and a performance not to be missed. Check out the respectively uplifting and dire music videos for “It’s Not Over” (which we featured in Beet Box Radio) and “Drifting” and judge for yourself.

Eliot Sumner (who at first glance channels The Killers’ better work) and solo-multi-instrumentalist Dosh are supporting the tour’s entirety. Connecticut and Boston Beeters have their turns to see ON AN ON on the 19th (supporting Dan Deacon) and 20th respectively.

We have got a pair of tickets to give away for ON AN ON on Thursday, September 17th at Baby’s All Right and are offering three different ways to enter yourself below. The contest is open until 6 PM on the 15th.

Tagged: electronic rock, on an on