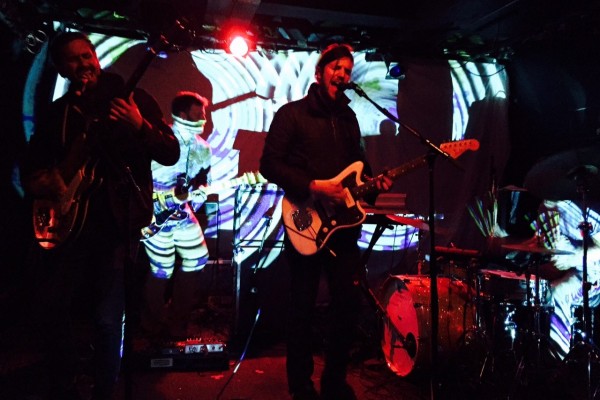 Attendance was a little underwhelming for the late show last Sunday night at Great Scott in Allston, MA, but those in the audience were subjected to a wonderful treat courtesy of ON AN ON. A favorite of ours at the ‘Beet, the Minneapolis, MN-based trio were formally part of the Chicago indie rock band Scattered Trees; however when that band broke up in 2012, Nate Eiesland, Alissa Ricci and Ryne Estwing decided to set out on their own. The result of that decision has developed into a band that finds themselves very comfortable cozying up to the emotional and visceral, communicating those experiences with a decidedly melancholic yet occasionally poppy tone.

ON AN ON (along with a guest guitarist and drummer) set the gloomy mood early on with “Behind The Gun,” the first track off of their newest LP release, And The Wave Has Two Sides. This mood was the rule during the set, not the exception, although the upbeat synth-pop track “The Hunter” from their debut album, Give In, and their newest single “Icon Love” proved to be highly enjoyable respites. Despite the ominous overtones, ON AN ON’s live set allowed for the emotions contained within their lyrics and melodies to come through on a personal level, which was showcased masterfully with lead singer Nate Eiesland’s rousing performance of “Drifting.” A song fraught with the impending dissolution of a relationship wrapped up in the context of a dreamlike state, Eiesland emphatically drove the point home with his loud repeated exclamation of “I gotta get out!” It certainly was the highlight of a powerful performance which was perfect for the intimacy afforded by the small venue, and one that certainly earned the Neat Beet seal of approval.

Opening for ON AN ON is a talented artist named Eliot Sumner, who rocked the house in a fantastic way for the Great Scott faithful. The daughter of rock legend Sting, the former frontman for The Police, Sumner’s initial forays into music began a decade ago at the young age of 15. Originally performing under the moniker I Blame Coco, Sumner has since started performing under her own name, and has been releasing new music throughout 2015 in preparations for her ‘Eliot Sumner’ debut LP in early 2016. Sumner’s live set was definitely an eye-opener as she played a whopping 10 songs as an opening act, weaving post-punk, new wave, and indie rock themes throughout the music she performed, impressing the crowd at nearly every turn. Some of the many highlights included “Firewood,” “Dead Arms & Dead Legs,” and “Come Friday,” and her performance was so good that some in the audience were hoping for an encore. It would be very surprising for her popularity not to catch fire in the next few months, so check out hew new EP, Early Reflections, and prepare to be impressed.

Starting the evening off was multi-instrumentalist Dosh, who like ON AN ON also hails from Minneapolis. Before he sat in as the guest drummer for the headliners, he performed his brand of experimental instrumental electronica, making heavy use of looping pedals, keyboards, samplers, and a drum kit. Dosh would begin with basic tones and sounds and gradually build rhythmic, sometimes slightly off-beat melodies that would loop in and out of each other. He has a practiced hand at his craft and his inventiveness is clear, but his music was a little lost on the Great Scott crowd who seemed to be more interested in hearing the stylings of Eliot Sumner and ON AN ON.

Tagged: boston, dosh, eliot sumner, great scott, on an on