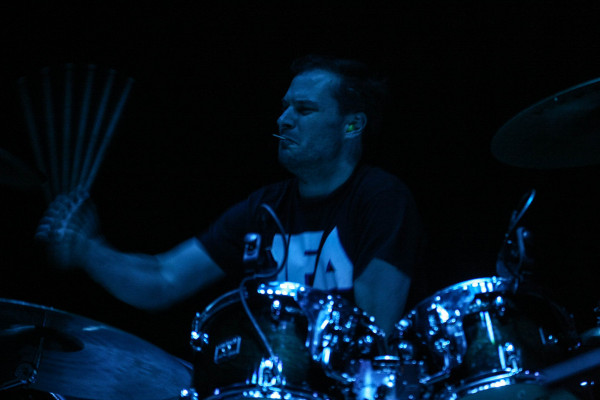 Om is a metal trio from San Francisco with an aire of gravitas and a sound that meanders into spiritual territory. Om was a duo for most of its existence, featuring Al Cisneros of Sleep as bass / vocals and Emil Amos of Grails on drums. For their 2012 LP, Advaitic Songs (Drag City), they enlisted a third member, Lichens, a man particularly known for his psychedelic wizardry. His addition in particular drew me to Om’s music. Having witnessed his craft solo an eternity ago opening for Black Moth Super Rainbow, I knew there was a potent combination brewing.

It’s taken two years since the album’s release for me to find my way to witnessing a live rendition. The music is built for the stage, with a dedicated crowd filling LPR and observing Om with reverence. An interesting dichotomy is watching Cisneros who is like a statue with a seemingly endless reservoir of energy versus Amos who is a fury upon the drumkit. Lichens is his own force, constantly swapping the tools of the trade like a precision surgeon. They would play a set hovering around ninety minutes in length.

I also came here tonight to catch Watter, an instrumental, post-rock trio. Britt Walford of Slint drums, Zak Riles, also of Grails, primarily focuses on guitar, and Tyler Trotter handles synth and keys. They put out a debut LP this year, This World, on Temporary Residence. Slow and deliberate ambient soundscapes define their music. Think of what you’d hear wandering a post-apocalyptic desert, but just be wary of when the tension builds.