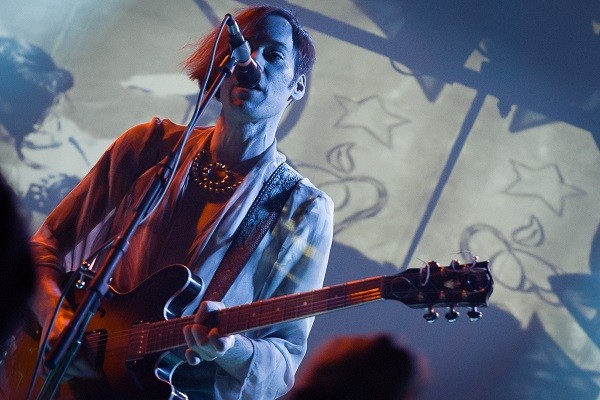 Rain, sleet and snow don’t stop the mail, and they wouldn’t have stopped me from getting to of Montreal’s March 9th stop at Toad’s Place. Luckily, the weather saw fit to accommodate my plans. My friends and I left our jackets in the car and walked to Toad’s in short sleeves, parting a sea of historically shitty winter weather.

On entrance, I noticed a small stage set up in the middle of the floor. Opening act Yonatan Gat ascended and launched into a flurry of percussion and bass. Lazer (drums) and Sayeg (bass) were a blast to watch for the whole set, eyes locked, Lazer playing with a manic glee and a cracked cymbal (the cymbal met its gory end in Boston the following night). Gat’s rapid noodling on songs like “North to South” and his jazzy tone lent the music a tropical feel. Unfortunately, the crowd was extremely lethargic throughout the set. I never like seeing enthusiastic bands shunned by a “here-for-the-headliner” audience, but the band drew solid applause for their energy. Deerhoof, a week off their European tour and familiar to the audience (they’re labelmates with of Montreal) riled up the crowd a little more, getting the front row jumping with songs like “Exit Only” and plenty of audience involvement.

When of Montreal (minus Kevin Barnes) filed out onto the stage, every feeling of anticipation in the crowd turned up another notch. The band played overture music while a caped, masked David Barnes (Kevin’s brother and of Montreal’s in-house artist/sculptor) cavorted around. He told us he’d been acquiring PhDs all day at Yale, and delivered good and bad news: he was “becoming quite the astrophysicist,” but he “leaned towards supervillainy” and had learned how to become an exploding ball of sand that would scour the skin from our bones. After our demise, he promised, we would have “a giant skeleton dance party” – and with that he summoned his brother to the stage.

Kevin Barnes walked in, drenched in makeup, and the band kicked off with “Bassem Sabry“, (the lead single off their March 3rd release Aureate Gloom). They glam-rocked their way through hits off 2007’s Hissing Fauna, Are You The Destroyer? and some lesser-known tracks off of False Priest and other earlier albums. Things got bizarre quickly with two costumed dog-boxers wrapped in American flag suits brawling onstage. Abraham Lincoln emerged to pacify them, pulling off their boxing gloves with an admonishing finger-waggle. Dancers held up parasol screens to the projector, displaying images of the human fertilization process. After their last song, amid rabid applause and screams for more, the band returned to the stage for two more songs off Hissing Fauna and a closing monologue by the caped character, telling us that as soon as we stepped outside we’d be catapulted into space as skeletons.

One of my friends suggested that we emulate Deadheads and follow of Montreal around on their tour. If only. I can’t get enough of this band.