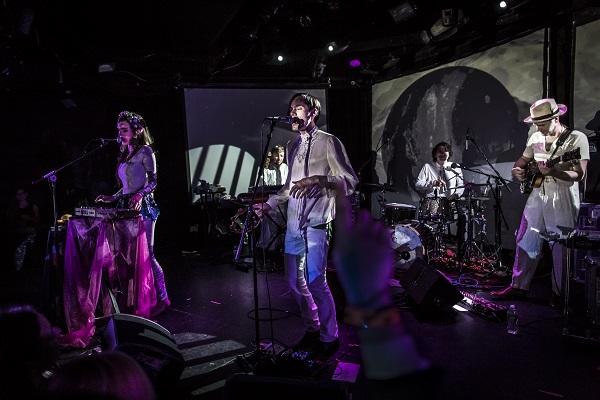 Opening for of Montreal, a band that has 12 albums each as magnificent as the next and currently comprised of Kevin Barnes, Rebecca Cash, Clayton Rychlik, Jojo Glidewell, Bob Parins, and Bennett Lewis, is no small feat. of Montreal always keeps it interesting and has never really settled into one sound for more than an album or two at a time, jumping from psychedelic funk rock to simple acoustic indie rock and all places in between, but never losing the incredible emotive power that Barnes brings to the table. Quite an impressive accomplishment, Dream Tiger opened up the night with great success.

Dream Tiger, trip hop dark wave 4-piece band comprised of only synths and a drummer led by Liz Wolf, started off the evening with an attention grabbing number off their latest album Self, featuring a few bars of Wolf’s beautiful voice with an effect I can only describe as male robot voice. Drawn in from that moment, Dream Tiger did what all good trip hop artists do and filled the space with layer upon layer of interweaving synth melodies supported by pounding bass drum lines, and led by Wolf’s curiously delicate and powerful dark soaring vocals. Dream Tiger has a sound in the same vein as Portishead but with more of a dream pop and shoegaze influence. They were most definitely received well by the audience and as they exited were met with a fitting roar from the crowd.

Every of Montreal show starts off in the same awesome way – an introduction from the one and only Lanc, also know as Kevin Barnes’ brother David. This evening Lanc informed us that he had considered killing us all because after all, New Yorkers are the most dangerous game, but for some reason he had a feeling he shouldn’t, getting a chuckle out of the crowd. On that strange note, he welcomed of Montreal to the stage who opened with the intro from “Girl Named Hello” off False Priest, leading into “Triumph of Disintegration” off their latest album Lousy with Sylvianbriar as Kevin Barnes joined the rest of the band on stage, which is clearly a crowd pleaser as I am quite sure every single person in the room sang or screamed along to the powerful opening line, “the last ten days have been a mother fucker, I don’t know if I’d survive”.

They then played “Disconnect the Dots” off Satanic Panic in the Attic, an old favorite of mine dating all the way back to 2004, having a sort of nursery rhyme feel to it on top of psychedelic swirling guitar. This song also has a very unique piano driven bridge with some fun vocal oldies style harmonies. Naturally, for a live show, of Montreal turned up the rocking by making guitar the driving force of the song and had everyone jumping and swaying along. of Montreal never ceases to amaze me with their ability to take already great songs and somehow make them even better and higher energy live, with a general trend of taking their more electronic songs and making them more rock.

Another crowd favorite was “Plastis Wafers” off Skeletal Lamping, a modernized funky disco classic that gave Barnes an opportunity to showcase his fantastic dance moves and also his ability to woo a lady, practically kissing the girl standing next to me in the audience as he sang the line, “wanna give you that ooh la, ooh la la” which is my personal favorite part of the song because of the cascading call and response style lyric. Rebecca Cash shined here with backing vocals and also with her powerful performance of “Raindrop in my Skull” after being sung happy birthday enthusiastically by the crowd.

It is inaccurate to say there was a highlight to the evening just because the whole show was so incredibly engrossing and entertaining, but the encore certainly came close to being the centerpiece. Lanc came back onto the stage and announced that he was indeed very glad he let us all live and proceeded to announce that the Barnes’ parents were present on this magical mother’s day evening and welcomed them to the stage. They performed a cute little number entitled, “Don’t Fuck the Candy Man” while Barnes prepared for his big reveal.

Barnes entered the stage hoisted by two others and masked by a white cloak as they appropriately began, “Suffer for Fashion”. The theatrics during the encore were a maximum and featured several dancers holding various shaped white cloth structures to project beautiful psychedelic art onto to give the music a visual form. The show ended, as it typically does, with “The Past is a Grotesque Animal”, providing the perfect ending to an amazing night as the song builds and builds and builds some more to ultimately come crashing down in a final burst of pure raw emotion. of Montreal showcased both their flawless musicianship and their ability to truly put on a show for the fans, playing songs from most eras and including visual theatrics to always keep the night interesting. Seeing of Montreal is the musically oriented version of a going to a circus and your constant entertainment is guaranteed.