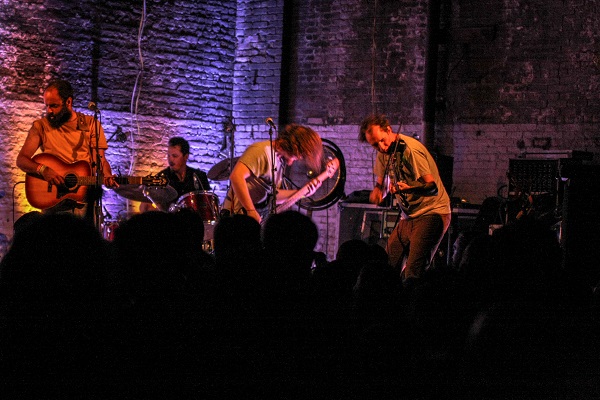 Brooklyn’s O’Death had been dormant locally for some time leading up to June of this year; no longer. The band’s marked their return with a signing to Northern Spy Records for their next album and a roaring show at new Brooklyn venue, The Wick. The lineup was bolstered by a slew of quality, local bands, and had all the attitudes of a celebratory and mirthful evening.

The evening made for a great introduction to the Wick. Exploring the cavernous space between sets led me to discover that the venue is a hybrid biergarten; that part of the space is called The Well. Its enclosed courtyard sports a lot of the street art that is idiosyncratic to Bushwick’s creative population. The combination of the two areas is quite large in total.

When I stepped out into The Well, I caught the tail end of the Juicy Art Festival. The reward for my exploration was a glimpse at its closing set by Xenia Rubinos. I last saw her a year ago at what was my final Maxwells gig in Hoboken, and was awash with fond remembrance. She’s still got her groove and then some, playing electronic pop music that bursts with enthusiastic yells and highs in sync with her drummer.

The first act at the event proper was Fletcher C. Johnson, a rock trio of guitar, bass and drums. Their music meandered between pop and folk sounds under Fletcher’s direction. There was a hearty amount of waxing poetic over O’Death’s return to a Brooklyn stage. They closed with “Gone Down the River“, an extended country-themed jam that they dedicated to a time long past when they last played together; it felt like the highlight of their set to me. They put out It Rained Something Wicked earlier this year and are frequently active on the live scene.

Shilpa Ray is always interesting to see live and another reason I hopped on board this show. I’ve always dug the dichotomy of her rock star swagger and toughness versus her choice of instrumentation. She primarily plays behind a harmonium, a musical tool far more frequently associated with more peaceful melodies, while belting out lyrics with an edge. She’s backed by a full band who are frequently upbeat, loud and authoritative. Shilpa Ray and Xenia Rubinos will play together at Baby’s All Right on July 10th!

Following was the elusive Vietnam, who have been on my radar since returning from a long hiatus with an A.merican D.ream last year. They definitely embody the spirit of psychedelic rock, as there wasn’t a moment of downtime in the fuzzy set. Frontman Michael Gerner intertwined one song to the next, ignoring any dialogue with the audience to weave his stories from a seated position.

With O’Death‘s arrival, it was as if an aire of celebration had come upon the audience. It didn’t take long for a proper catharsis; a mosh pit burst out, complete with a man in a pizza costume at its epicenter. O’Death’s dark, twisted and energetic take on the folk sound inspires an active crowd, and fed back into me quickly. The twang of the banjo and strike of the violin are their hammer and sickle. The set was unusually welcoming, and had me leave this night a fan, with resolutions to learn and familiarize myself with the rest of their discography.