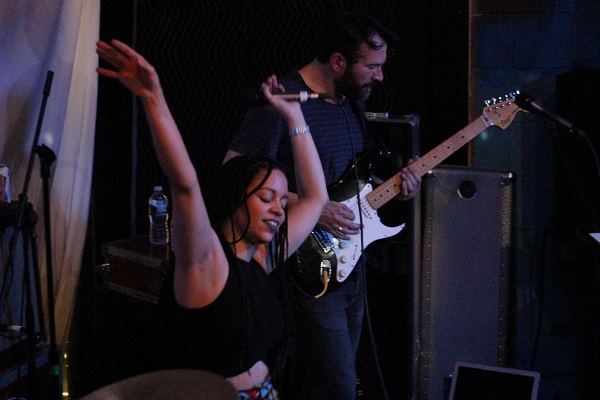 I have followed the work of London’s NYPC since their early days when they were comprised of a multitude of members and went by their full name, New Young Pony Club. They’ve since shrunk their lineup to three and abbreviated their name in conjunction. Their United States tour dates have come few and far between and I almost hit the panic button earlier this year when this show was initially postponed due to visa issues. In the end, the affair was successfully rescheduled and they played a sold out show at the Glasslands in Brooklyn last Friday night with support from DWNTWN.

Los Angeles quartet, DWNTWN, began the evening with some very digestible synth pop. They are fresh off releasing a self-titled EP, their first new material in two years. They sported a great vocal dynamic with lead Jamie Leffler and guitarist Robert Cepeda would alternate parts. Their latest single, “Til Tomorrow“, transfused lush, summery vibes into the Glasslands’ atmosphere. One of their closing tracks, “See My Eyes“, serves as an example of where this bands strengths lie. They even put their own spin on The 1975, covering their hit, “Chocolate”.

Despite being plagued by seemingly constant technical difficulties, NYPC didn’t let it dampen their spirits. Led by frontwoman Tahita Bulmer and her good humor and commanding stage presence, some engaging banter kept everyone involved through the tough times of the night. Malfunctioning equipment and electric issues were a definitely a downer and their set was even cut short a track. NYPC actually played through the pain for their early commercial hit “Ice Cream“. The end result was almost a largely unplugged rendition of the song that featured audience vocals to compensate for the missing instrumental parts. It actually turned out to be a very positive, memorable moment from the night.

Old school and new school NYPC came together well. They featured tunes from Fantastic Playroom and The Optimist as well as their newest release. The new album is solid, featuring ear-opening electronic hooks that served as a backing track throughout their live show. “Hard Knocks” and “Things Like You” were as infectious live as they are through your headphone speakers. Bulmer provided support through a melodica during a track as well. What is important to take away from this show is that NYPC put on a fun night of electronic dance pop and that you can still work around technical problems without losing control.