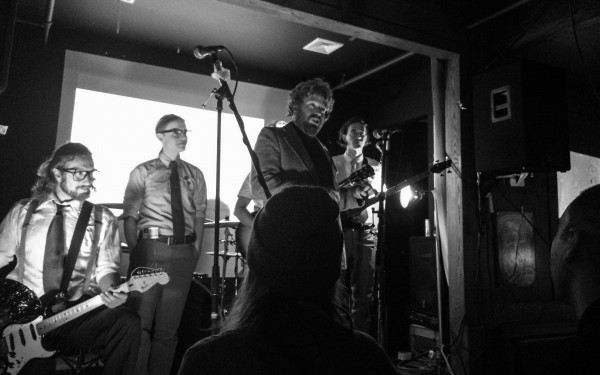 At the vanguard of the battle against burglars last week was Brooklyn rock outfit, Not Blood Paint. A community fundraising event was organized by them at Bushwick’s King’s County Saloon in support of one of their dearest collaborators, James PM Lee. The filmmaker’s equipment was robbed from his apartment late last year, and Not Blood Paint went all out to back up one of their own in a time of need. The event featured a wacky style of humor, enhanced via host Mike Fox, and a real sense of community; there were a slew of volunteers and local businesses and artists supported the gig with a silent auction and raffle.

This was also my first time encountering Not Blood Paint, who blend toughness and theatrics into a really tight stage presence. In between group pantomiming and choreography, their snarl fostered a mini mosh pit, making it a pretty fun place for both observers and participants. The most immediate comparison of their music to me is one of my favorites across the pond, Scotland’s Biffy Clyro. I look forward to catching them again soon and delivering a real photo gallery that properly demonstrates their prowess. Their latest release was last year’s EP, Time to Deliver.

Joining the bill were our tried and true Wannas, Big Figment, and Steve Nelson. I didn’t catch Steve, but both Big Figment and Wanna embody the duality of being hard hitting and slightly silly that was core to the musical acts performing this event.

Thanks for the shout out and great photo! We had a blast supporting this cause!

I loved everything about this show. Fox was foxy. James was attacked in the ritualistic fashion that is common during acts of kindness. All the music was incredible. The food and people and staff were brimming with awesome. Hopefully, it's motivation for all of us to be a better person.