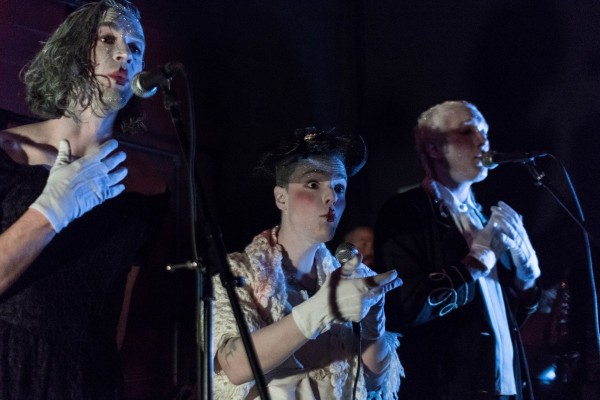 Our favorite Brooklyn art rockers, Not Blood Paint, were at it again over the weekend. The musical mischief makers, who have a penchant for costume and all types of theatrics, hosted a faux-formal, semi-spooky ball at Bushwick’s Lot45 this time. As always, a creative array of bands invited to join and test their mettle made the show much about the community that surrounds them.

Their very late performance tonight was teed off with an introduction from the wily Mike Fox, and a capsule toast with the band and their dates. The serene veneer blew up into smithereens once things got rolling with “Promiscuous,” off their last EP and a crazy music video that I always wind up watching. People were bouncing and headbanging all around me, as good rock music properly allows. A roaring demand from the audience brought them to deliver an unexpected encore as curfew approached.

Not Blood Paint also recently announced their next album is near ready for a 2016 release, and are currently soliciting ideas on how to properly crowdfund around it. If you’re invested or intrigued, it may be worth getting your say in.

A major lure for me tonight was Starlight Girls. I’ve been a fan of them since I stumbled upon their throwback-psychedelic pop in their self-titled EP a few years back and I’m psyched that they are resurfacing with a real record, Fantasm. Maybe you heard “Intrigue” from Beet Box Radio or saw the video for “Fancy” premiered yesterday? The sounds we hear are moving in more diverse directions, and the live show and visuals are strong.  It’s a little weird though that tonight was billed for them as a record release show with the official availability still months out. ¯\_(ツ)_/¯

M.H. and his Orchestra, who traveled from DC for tonight’s show, win accolades for biggest sound. They may get this by default with their numbers advantage of eight, which was allegedly a stripped down count. I had a lot of fun trying to capture all the individual members at their bests, with their glamorous frontman, M.H. showing how he manages to corral them all towards a successful musical venture. Check out 2012’s The Throes for a glimpse at their sound, though this is a band that must be seen to be believed.

Spirit Plate opened the show with less frills than the rest of the performers out tonight, but still put some cool vibes out to warm things up. Maybe they’re not entirely normal; the band does have an odd obsession with recipes, offering a couple home-cooked ideas up for everyone (Vegetable chowder? Looks legit.) If you dig tropicalia or have ever imagined what garage-indie-pop sounds like, give their self-titled record a perusal.