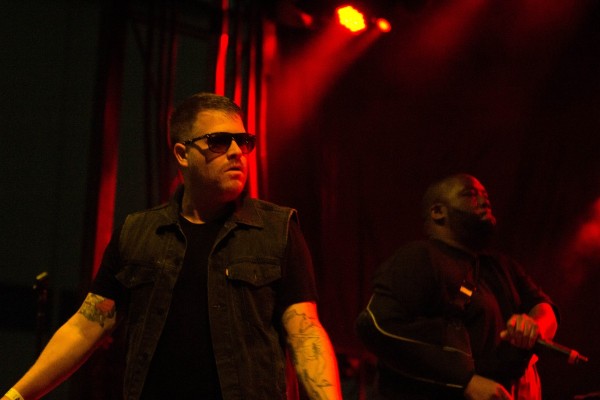 On the 14th of June the seventh incarnation of Northside Festival wrapped up. Northside is a discovery festival founded by Northside Media Group, based in North Brooklyn. It has three main components, Innovation, Film, and Music, and on the weekend of the 12th, hundreds of thousands of attendees went to see some of their favorite music acts, and discover new ones along the way. The music portion of the festival took place all over North Brooklyn, with a big line up and a solid selection of music venues across Greenpoint, Williamsburg, and Bushwick. Neat Beet had the chance to cover some of these shows over the weekend, starting with Alden Penner (from The Unicorns) and Michael Cera on tour.

Michael Cera and Alden Penner are old time friends, and frequent collaborators, and in support for Penner’s latest solo work, Cera joined him on tour, stopping by The Knitting Factory for a delightful show of indie tunes full of quirky, honest lyrics. Even though the sound had issues with vocals, the instruments were mostly sharp, and Cera was charming, rotating through all the instruments alongside his buddy Penner. You could tell they just have a lot of fun on stage, and played some unreleased songs. They released a single previously, titled “Breathe to Burn.”

Most of the big acts and headliners took place at the huge outdoors of 50 Kent Ave, with a stage that had a breathtaking view of the city at sunset and the east river during the sunset. Best Coast, hot off the release of their latest album, California Nights, headlined Saturday evening, with Built to Spill, Alvvays, and Bully as supporting acts. Seeing the legendary indie rockers of Built to Spill play was a lot of fun, and they just released their new album Untethered Moon, which is some of their best work in years. Doug Martsch can still shred a guitar flawlessly. Best Coast followed through, playing a hearty combination of their most recent indie pop rock work, and some of their older surf rock vibes. Bethany Cosentino has an amazing stage presence and Bobb Bruno is a perfect match, creating catchy guitar riffs that complement Bethany’s vocals.

On Sunday the headliners were pretty big, with two great hip hop acts and noise pop favorites Sleigh Bells. Vince Staples, a young and emerging rapper from Long Beach and past guest verse king in a lot of Odd Future member’s tracks opened the evening. Staples has been growing as an artist, adding complexity to his lyrics with astute observation of society, sharp criticism of his past life and his longing for a better way of life, while keeping the catchy verses that made him stand out in a lot of Earl Sweatshirt songs. His debut album, Summertime ’06, drops June 30th, and I personally can’t wait. Local Brooklyn noise makers Sleigh Bells played next, and it was pretty much what you expected of a noise band, a lot of simple pop hooks juxtaposition with energetic shouts, electronic beats, guitar noises, and stage antics.

The last big show of the night belonged to Run the Jewels, who have gotten huge since their 2013 debut album and the follow up, RTJ 2, in 2014. Delivering a lot of smart and biting social commentary, New York based rapper/music producer El-P and Atlanta based rapper Killer Mike captivate their fans, with choruses that you can sing along, glitch beats, and a lot of existential lyrics. The duo has a massive fanbase and they started work on “RTJ 3” earlier this year. The big surprise of the night was when they brought out legendary rapper Nas to join them on stage. And even though it was raining the crowd stood on their feet and fist pumped until the night was over.

I still can't believe Nas came out. Wish I was there!