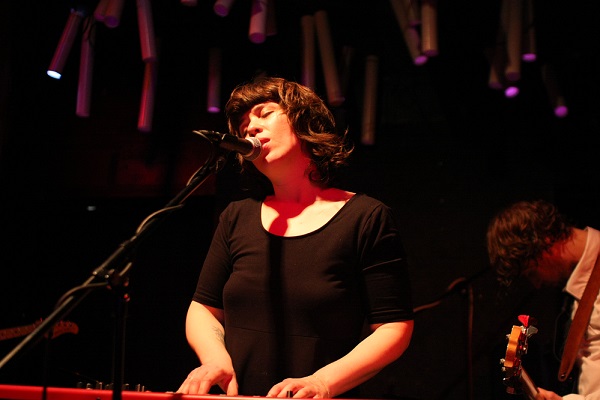 One of the saddest pieces of indie music news I read this year was that of the surprise breakup of North Highlands, which was announced via Facebook last month. Singer Brenda Malvini of the five piece will be leaving New York City and going her own way. A triumph in addition to giving us one last show is that they will still be posthumously releasing a follow up to their 2011 debut, Wild One. I will always cherish them as one of the first local bands I came to adore here and we will be keeping our ears open as details become available about that album.

The show itself was one to remember, with a set list numbering twenty songs, which was unusually long for a Glasslands show. The performance included most of Wild One, last year’s single I’ll Do My Best, unreleased material from the new LP, and selected favorites from their first EP, Sugar Lips. The emotional enormity of the band’s farewell seemed to really hit for the three song encore, which featured two of their most upbeat tracks, “Sugar Lips” and “Here’s” before descending into one of North Highlands most melancholy songs, “Collarbones”, to close out things for good.

Humors were kept pretty high until then though. A back and forth banter between the crowd and band was steady between songs. There was also a “fire sale” held on merch during the set; the band gave everything they had away and the fans eagerly consumed it; vinyl, tees, totes, the whole shebang. Stickers and set lists were available en masse at the front of the stage as well and the leftovers were turned into confetti by the show’s end.

I also caught openers Bennio Qwerty and Ablebody. Bennio Qwerty is the side project of North Highlands guitarist Mike Barron, and features his voice and a harder sound than we’ve heard previously. The band’s sound is well into post-punk territory, and its quality attests that new music will continue to grow from the ashes of North Highlands. The cycle of rebirth in action. Ablebody from LA is a similar example, as the brothers behind the band were once part of the well respected chiptune band, The Depreciation Guild. They now make a style of dreamy rock that reminisces of it. Seeing these bands do their stuff makes me think not of endings, but opportunities for new beginnings.