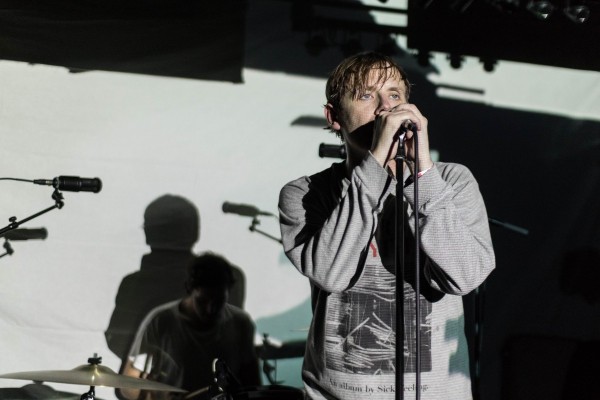 The buzz from the restaurant in Maxwell’s Tavern was audible; guests only vaguely aware of the bands tuning up and focused instead on the fate of a high-stakes Mets game. Their hopeful, high spirited talk of game changers and due timing created a warm, last-day-of-tour vibe. With No Devotion’s debut album Permanence hitting the charts and a mostly UK/European tour coming to an end, this close-knit neighborhood venue was packed with people looking to see heroes triumph adversity.

Openers Deaf Rhino commanded a sultry, rock-god status over their hometown crowd. Their powerful blend of boozy swagger rock can be heard on the track “The Heights,” off of their Debut LP, Dirt, Rust, Chaos. I would recommend them for fans of Bayside, and similar upbeat but moody territory. Deaf Rhino has currently set up a residency at Maxwell’s Tavern, playing once a week now that the space is open and booking shows again. This band is a key part of the venue’s push to remain relevant in the New York/New Jersey music scene, continuing the cherished legacy as a creative space for a new generation of musicians and fans. Deaf Rhino will be heading out on tour for the month of November, but will return to support this new chapter of the venue even after their residency is over.

Before the show, New Jersey native and frontman for No Devotion, Geoff Rickly (Thursday, United Nations), was talking to friends and fans while hanging a white curtain behind the stage for the projector. Raving with excitement over Wax Idol’s upcoming release, Rickly offered Neat Beet some thoughts on the current status of his independent record label, Collect Records. Recent news found the label’s angel investor Martin Shkreli, CEO of Turing Pharmaceuticals, involved in improper business practices which forced the label to sever their ties. With such a huge cut to their funding, the response from the fans and the bands alike had been doubtful in the label’s ability to stay afloat. Rickly’s attitude was positive but realistic, and when asked if he would consider using crowd-funding to raise money, he mentioned that he would prefer not to. Uninterested in taking money from fans who are already dedicated to the success of the bands, he spoke of his hopes to look into other options and find a way to continue funding this art.

With no limits being put on the art they will make together, No Devotion’s sound warrants obvious comparisons to The Cure and Joy Division. Permanence is a romantic and dark exploration of character, lyrically drawing inspiration from the current status of Rickly’s life as opposed to an over-arching theme. Tracks like “I Wanna Be Your God” smolder with a slow, churning sex appeal. There were moments during the live show where their frenzied stage presence and the crowds vocal participation crossed the line towards a punk-ish place you wouldn’t expect glossy synth rock to be found. But, this project represents more than just the beginning of a new band discovering their signature sound. With the shocking and dark end of the Lostprophets in 2013, the remaining members were forced to walk away from a project that had sustained their careers for over a decade. Rickly, being no stranger to life-changing circumstances, was the perfect addition to form this “supergroup.” There are absolutely moments both on this record and in their live show which fans of both Thursday and the Lostprophets will find appealing.

In what can only be described as classic New Jersey DIY, Rickly would hop off stage between songs to manually adjust the projector; broadcasting other-worldly textures of shining space and light. Recent events surrounding the band have proven that from darkness, comes light. I’ve found this to be true, especially in places where people participate and support their local scene like they did here.