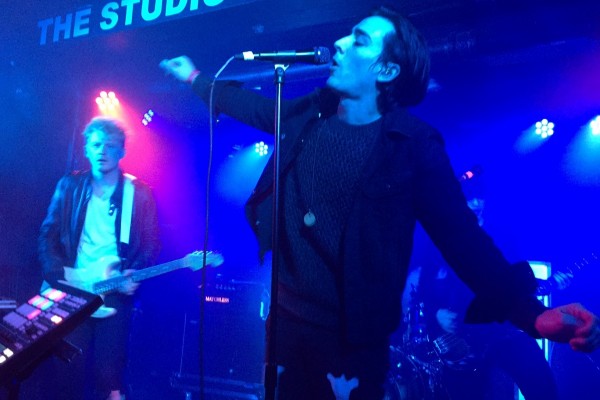 West Coast met East Coast on a frigid March evening at The Studio at Webster Hall, as Night Riots brought their indie, alt-rock sounds from California to NYC, providing an enjoyable, entertaining atmosphere for those in attendance. Having recently released their second EP, Howl, a couple of months ago, Night Riots played an expanded set list derived from their new album and their previous EP, Young Lore, getting the crowd moving to the music Travis Hawley and his mates provided during the evening.

I was lucky enough to have a front row spot for their set, and given that there is no barrier between the stage and the audience at The Studio, it proved to be a great location to get a sense of the energy and fun that Night Riots puts forth. Before the show, it was hard for me to put my finger on exactly who/what Hawley sounded like (because it sounded oddly familiar), but after standing thisclose to him the whole night and experiencing the anthemic nature of Night Riots’ melodies, Hawley came across sounding similar to The Killers’ frontman Brandon Flowers while looking like John Cusack’s character Lloyd from Say Anything…, to which both of those comparisons are very good things.

Starting their show off with one of the songs off of their debut EP, “Remedy,” Night Riots alternated between their two EPs the whole night, playing the 80’s-twinged (and my personal favorite) “Back To Your Love” and the ‘even-better-in-person’ track “Spiders”, along with new offerings like the upbeat, hard-hitting “Oh My Heart.” Hawley and Co. ended their set by playing their new single off of Howl, “Contagious,” easily their most popular song to date, before encoring to the title track from Young Lore to the delight of the Studio crowd. Based on this show, I can definitely say that Night Riots’ popularity is clearly trending upward, and I wouldn’t be surprised if they ended up coming back to NYC and Webster Hall, only this time playing the Ballroom. Those of us who caught them this night will look back fondly on this show, while gladly coming back for more.

Opening the evening’s festivities was the Brooklyn rock trio AM Aesthetic, who I unknowingly stood next to for a large portion of time between doors and the beginning of their set. They played a short, but energetic set capped off by songs like “The End” and “Weightless,” the latter of which they stated are releasing a music video for very soon.

The energy kicked up a notch with the second opener of the night, Deaf Rhino, who really rocked the house with a heavier sound and boundless energy from all 4 members of the NJ band. “Infinity” and “Ghosts” were a couple of solid takeaways from their set, along with the mention of their debut album coming out in May called Dirt, Rust, Chaos. Dropping on the 5th of that month, they are cleverly calling the day of its release “Cinco de Rhino”; good luck forgetting that one.

The third and final opener of the night was the band who is touring with Night Riots, the dark, dream-pop LA-based quartet Dræmings. Led by lead singer Kimi Recor, the occasionally shoegazey set was thoroughly enjoyable yet short, but highlighted by offerings like “Sinking Ship” and “Like A Ghost”, a song where Recor actually interacted with yours truly at the song, getting down to my eye level and singing directly at me whilst grabbing my hair with authoritative confidence. It was certainly one of the highlights of a very entertaining evening of talented bands.