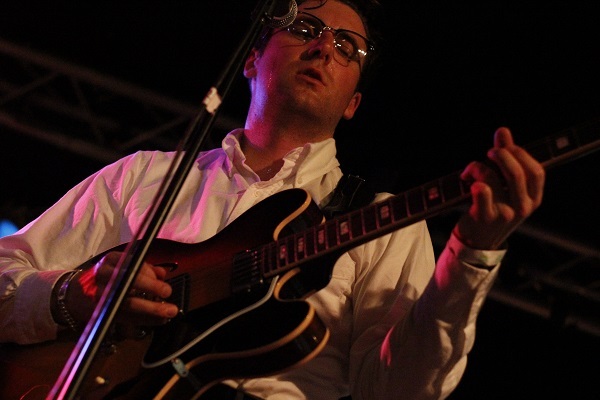 When Nick Waterhouse picks up a guitar and microphone, you get serenaded into the old school days of soul and blues. There is a contemporary void in the music industry when it comes to vintage R&B territory. Waterhouse remedies that by performing with a band that features his vocals/guitar with a saxophonist, keyboard player, bassist and plenty of backup percussion. I’m accustomed to the ballroom at The Outer Space being filled with the sounds of the modern indie era. Last Thursday night, it felt more like a ’60s dance hall.

Waterhouse started making some unique noise with his 2012 release Time’s All Gone, and followed that up with his second LP, Holly, released earlier this year. His material has ranged from the melancholy blues, to upbeat soul-filled tunes driven be strong vocal performances, jazzy guitar solos and bluesy sax riffs. Being that his band contained the first live saxophonist I’ve seen all year, I was drawn in fairly quickly to an instrument I don’t often get exposure to. “High Tiding” showed off Waterhouse’s range and ability to strum wildly on his guitar. The swinging “This Is a Game” represents his most dancey material with insanely catchy hooks on all instrumentals. Both tracks come from Holly and are strongly representative of his setlist for the evening. The bottom line is that Nick Waterhouse and his band bended the laws of time, flawlessly transporting the spectator to a whole different decade with a forgotten sort sound that should still remain timeless. I can’t wait to see him perform again.

Another band with retro roots, PEP from New York City, opened the night brimming with positive energy. They contributed to the well-rounded billing by tackling the mid 2oth century, just from a more pop perspective. More appropriate for Beach Boys or Grease culture, their on-stage presence had that old school set up down from their tandem backup vocalists dressed similarly to their bowtied drummer.

Check out this link for a full photo set.