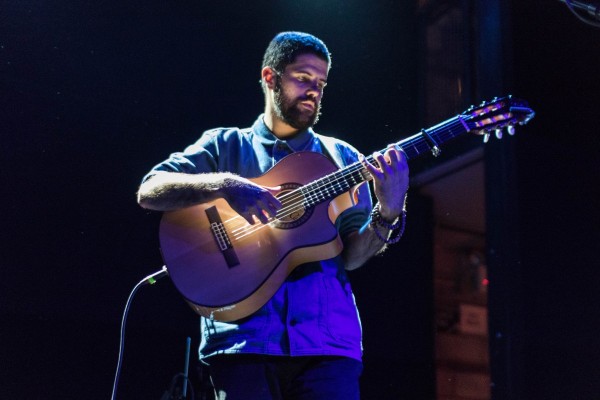 Irish folk sensation, Nick Mulvey, made a return last week to US shores. Having caught him and been left swooning at his last NYC appearance here in September with Slow Club, I was keen to double down and get a proper set of photography of the man in action. If you don’t recall, his debut LP, First Mind, was nominated for a Mercury Prize last year, and it was absolutely worthy of that consideration.

Watching the man command an audience with just his voice and a plugged in acoustic guitar is something wonderful. In the UK, he often draws a multitude of people to his performances, but here in NYC the grow of his popularity has been a slow burn, so we are privileged with something intimate with the space within Rough Trade. Nick Mulvey did leave me rubbed wrong one way though; in September, he promised that he’d return with a full band for his next show and that was left unfulfilled here. My anticipation to see his music in a new direction left me disappointed at watching him solo once more.

A very pleasant surprise early in the night were Aussie rock outfit High Highs. Having never heard them I was struck by their warm, comforting music. The band have a delightful album from 2013, Open Season, and were debuting mostly new material tonight. Listening to uptempo tracks like their single last year, “Ocean to City,” gives me high expectations for their forthcoming record.

A local duo by the name of Andrei Rublev opened the gig, who are relatively new, with only a couple singles available online. What is most apparent to me about their style of atmospheric and chill rock is that it’s very percussion heavy. They’re worth a peek to see if you like that or not.