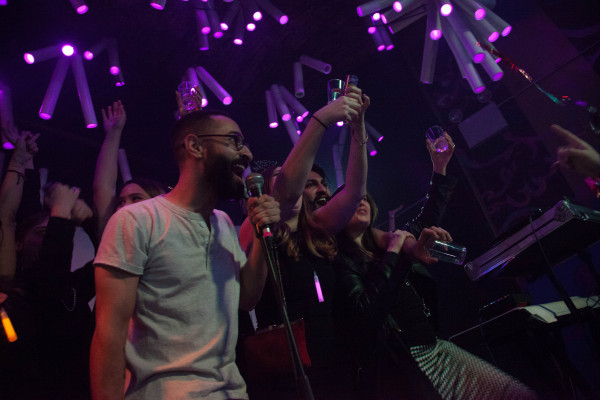 Like the borough itself, the live music scene in Brooklyn has been rapidly changing over the past couple of years, losing some amazing venues and nightlife spots in the process, and with the arrival of the New Year, we say goodbye to the old 2014 and our beloved Glasslands Gallery. The venue has been around since 2006, a transformed art warehouse that featured eclectic music acts, wild dance parties, and was home to a lot of bands in the local scene. Every night at Glasslands was a small journey into the best of D.I.Y culture and indie music.

Glasslands is the last venue to close in the area after Death by Audio, and 285 Kent left us. They decided to throw quite the party, including a champagne toast to ring in the new year at midnight. Their last show consisted of a previously secret bill that featured local band Beverly, Smith Westerns  (who recently announced their break up and were playing their last show), Sky Ferreira, and DIIV. It was a sold out show with a packed house of devout fans of the venue who came to say goodbye to the artsy and chic music space.

The night started with some fuzzy garage rock offerings from Beverly and Smith Westerns, Beverly is Frankie Rose’s (previously of Dum Dum Girls) rock group. Their opening set finished with a cover of The Smiths’ “I Know It’s Over,” a fitting song that the group worked on the night before. Smith Westerns, from Chicago, played their last songs together, filling the room with loud songs about teenage frustrations and catchy pop hooks.

After saying hello to 2015 with a champagne toast and some words from Glasslands & Popgun owners Rami Haykal and Jake Rosenthal, Sky Ferreira brought us some refreshing alt-pop and later joined us in the crowd as DIIV to the stage to play some old favorites like “How Long Have You Known” and a couple of new songs. They finished their set with “Doused” which ignited a mosh pit amongst the crowd.

After all sets were over, the Discovery DJs began a dance party that continued late into the night. Glasslands said goodbye, but not forever; maybe we will see a new location by the same owners down the road and meet again elsewhere.