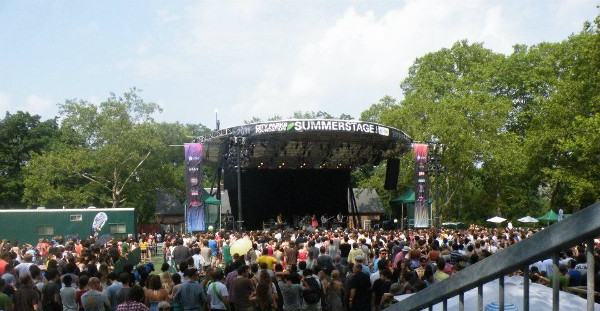 Ignore what your calendar says. Although it may read “Summer Solstice” on June 21, the true summertime kick-off is the Summerstage schedule. It is a series of exceptional benefit concerts (those can be found here) and a plethora of free shows within any New Yorker’s reach. Each venue is outdoors and gives off the best vibes of each borough. There are so many shows happening throughout the summer that we felt the need to help you out: by giving you 10 free Summerstage shows we are especially happy to check out.

If there was an inaugural Summerstage kick-off party, Ty Dolla $ign would be 2014’s big bash. The rising hip-hop artist who cites that Nirvana has just as much impact on his music as 2Pac has collaborated with Wiz Khalifa, Y.G., and Chris Brown among others. Although there are no openers as of yet (and there just might not be) Tyrone Griffin is sure to bring a sample of what to expect throughout the coming months.

It’s hard to believe that the first two shows on our list both happen at the same place back-to-back. But after some heavy-doses of hip-hop, it might be nice to enjoy some of the most buzzed-about musical projects this year. Both Mark McGuire and Marissa Nadler have released albums this year and you’ll certainly hear how some of those tracks translate live. Multi-instrumentalist project Delicate Steve is a great reason to show up early.

A typical cure for the mid-week blues can be Trivia Night at a local pub or catching up on Game of Thrones. But a chance to see “Thong Song” singer live? That is a sure-fire way to shake out the cold from the last few months and makes for a better story at the water cooler on Thursday.

Jon Batiste is New York by way of New Orleans. And it certainly shows. The Juilliard pupil recorded a Southern-style jazz record in the NYC subway system and has collaborated with an array of talented musicians. (Wynton Marsalis, Prince and ?uestlove are just the beginning of a long list) He is joined by a big band with horns section.

Jazz, folk, rock and country blues are just some of the genres Andrew Bird embodies. His looping-style is applied to his guitar, violin and vocal instrumentation to provide a more orchestral experience to the typically one-man show. He will be joined by Luke Temple, the former painter and cornerstone of Here We Go Magic.

Following sold-out shows at Terminal 5, Brooklyn Bowl and Best Buy Theater respectively, Bonobo, Cibo Matto and Odesza are returning to New York to bring about the best in Summerstage culture: an afternoon of multi-genre talent. Cibo Matto might stick out like a sore-thumb among the ambient instrumentalists but they’re a can’t miss just as well.

Does it seem like the summer schedule has been very upbeat and you need a chance to relax and take a breather? J. Holiday is a laid-back R&B artist that will certainly bring everything you love about Boys II Men and R. Kelly to Queens.

Pete Seeger’s passing in January has been one of the things that would keep 2014 from being a contender for “best year ever”. But with this four hour event, Seeger’s impact on charities and music will come to light again. In addition to a night inspiring change for the common good, there will be performances by many who were inspired by him. Amanda Palmer will be doing a solo acoustic set. Steve Earle, Anti-Flag and The Chapin Sisters are just some of the others billed.

Don’t tell your friends that August is the end of Summer because this show certainly shows that there is plenty of time to still party and have a good time. Dr. John is one of the most iconic names on the Summerstage schedule and with six Grammy Awards under his belt, it’ll sure be a packed house. We’re hoping for a collaborative with newcomer, Hurray for the Riff Raff, who just released Small Town Heroes a few months ago.

Want to plan a date she’ll never forget? Stand out in the heat/rain/cold/whatever to get a chance to see “Let Her Go” singer Passenger do his stuff. He’s all over the airwaves and this is probably one of the few chances ever you get a chance to see him without getting to Rockefeller Center at 5:00 AM for a good spot. Opening the bill is DJ Natasha Diggs and Liam Bailey.