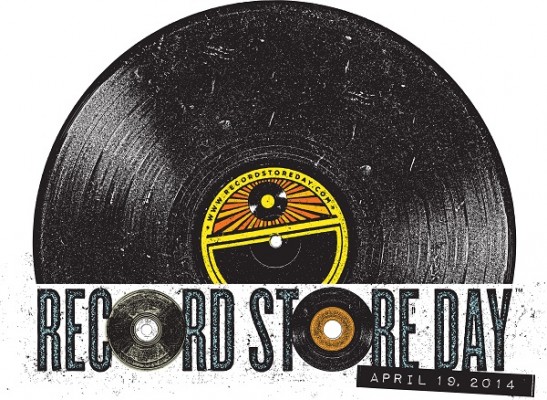 Whether you’re one of the millions of people who started a record collection last year, (the highest sale of vinyl in the past 10+ years) you’ve continued to expand off of your parents’ record collection or you prefer the convenience of your iPod, Record Store Day is a joyous occasion for any music fan. It’s more than celebrating vinyl recordings: it’s a way to bring people together.

Record Store Day turns 7 this year and like previous years’ celebrations, there will plenty of unique, exclusive releases from many of your favorite artists. This year’s list is larger than ever and contains so many different artists, it would be difficult to write about all of them.

We created the Neat Beet’s Guide to Record Store Day 2014 because we want you to get the most out of your Saturday. Record stores everywhere are pulling out all the stops to make sure you step through their doors. There are a lot of stores (you can find ones in your area here) and a ton of records to choose from. It can be rather overwhelming. This guide includes releases some of our staffers are looking forward to and some neighboring record shops that have big things planned.

Looney Tunes will be opening its doors at 8:00 AM on Record Store Day. But if you sign up for their year-long VIP membership, you can peruse the store a half hour ahead of the public. Stick around throughout the day because the store will be home of not one but three in-store performances/autograph signing/meet-and-greet events. The events take place feature Nashville indie band Moon Taxi, British singer-songwriter James Maddock and NY-based The Last Internationale. The events are free to visitors of the store.

Collectors, listen up. As we speak, Redscroll is offering discounts on everything in the store. Clearance LP’s are 50% off and everything else is 15% off. They even have a large selection of CDs and LPs that are just $1! This promotion leads up to their Record Store Day celebration, which will have goodie bags for some of those who wait in-line and two food trucks (G-Monkey Mobile and Hardcore Sweets Cupcake) to keep the hunger pangs down. Redscroll are extending their hours from 9:00 AM – 10:00 PM that day too.

The Telegraph will be keeping their doors open for 12 hours straight, from 10:00 AM to 10:00 PM. Freebies have been promised but are expected to go very quickly. Don’t plan anything else that day because the famed New London record store has live entertainment from 2:00 PM until closing. Confirmed so far is Pocket Vinyl, Daphne Lee Martin, Elison Jackson, Call Before You Dig jazz crew, Sketch tha Catalclysm and much more.

Worried about waking up early to get those releases you need? Exile on Main Street will be supplying enough donuts and coffee to keep the Friday night hangover at bay. They also have giveaways throughout the day.

Scotti’s seems to be on the ball when it comes to Record Store Day. The store has been receiving pallets of vinyl records for this momentous occasion. The store will be open from 8:00 AM to 8:00 PM on Saturday.

The Record Store is one of the few places that has proudly announced having the adorable Crosley Peanuts Cruiser Turntable exclusive to Record Store Day. If you’re in New Jersey and want to be the best aunt/uncle, granddad/grandma or simply want to stay a kid for just a little longer, head over to this shop. They open the doors at 9:00 AM and will let people in one-at-a-time and limit each release to 1 per person. After all, sharing is caring.

Vintage Vinyl is celebrating 35 great years and will be bringing the party to their Record Store Day. They will be opening their doors at a very bright, early 8:00 AM. There will be contests for two test pressings. (Jay-Z and Linkin Park’s Collision Course and Regina Spektor’s 7″ single for “You’ve Got Time”) While you’re there, you may want to pre-order Midnight Sun from Sean Lennon-fronted The Ghost of a Saber Tooth Tiger – they have an in-store performance and signing that is open for those who buy the album out April 29.

The music store that supplies music to where music was reborn opens early on Record Store Day, at 9:00 AM. They will have a fantastic 50% off deal on vintage vinyl. Best of all, they are spilling the beans on the quantities of each Record Store Day release they are expecting in stores.

This is your last chance to attend a Record Store Day at the famed Albany record shop. Fuzz is to be converted into a craft brew shop in a couple of months. Fuzz Records will open early at 10:00 AM and close at 8:00 PM. More information can be found on their website.

Rhino Records is currently ironing out details but they are expanding Record Store Day into Record Store Weekend! We can only guess that there will be sales and extended hours galore. This is also great for people who mistakenly penciled something menial in for Saturday.

In addition to opening at 9:00 AM, Rough Trade has an ample amount of up-and-coming talent throughout the day. Scheduled thus far is The Rails, Nothing, Fear of Men, Perfect Pussy, Amen Dunes, Mark Mulcahy, Palehound, Slothrust, Betty Who, Simon Raymonde (DJ), Dapking DJs, DJ Justin Strauss and Deano Sounds. Acts are scheduled to start at 1:00 PM.

The store is opening at 10:00 AM on Record Store Day and is promising a limited amount of most releases on the list. (aka arrive early) The store also has promises of fun gifts and other swag to keep you happy.

Not everyone has the blessing of having off on the weekends. For those who have to pick up a shift on Record Store Day, Bleeker Street offers a solution. They will be open from 10:00 AM – 11:00 PM: a whopping 13 hours.

Although they couldn’t spill the beans to us just yet about who is expected to show up, Generation Records has a day of music planned. The store opens an hour early (at 10:00 AM) and will have 3-4 bands and a handful of DJs. Doug Gillard and Swearin’ were just some of the acts that performed last year so we can expect something incredible for this year too.

Off! – Learn To Obey
I like punk bands. I like artwork by Shepard Fairey. His name means a lot more to me when it’s in the news than when it’s Keith Morris.

Creepoid – Wet
Creepoid, of Philly, makes a special brand of rock that falls somewhere icky between the genres of shoegaze and grunge. They’ve teamed up with paranormal-obsessed label, Graveface Records, to release Wet, an EP that follows up on their self-titled album released last month. The Record Store Day edition has a whacked-out etching on the B-side. The band is back in NYC for live performances at Cake Shop on 4/30 and Death by Audio on 5/18.

Anamanaguchi – Scott Pilgrim Vs. The World (Original Video Game Soundtrack)
I spent a hot summer day sitting in the street outside Studio B talking to four dudes who were into their Nintendo and guitars. It was my first interview and it wasn’t long until the four guys, best known as Anamanaguchi, became recognized and appreciated by the nerds and geeks. (guilty) Even more addicting than the movie of the same title is the Scott Pilgrim Vs. The World video game. They made the soundtrack of the video game and now I can fully enjoy it without the sore thumbs and carpel tunnel.

Bruce Springsteen – American Beauty
I have seen my fair share of concerts and have been to some great festivals but Bruce Springsteen & The E Street Band have turned every experience I’ve had on its head three times over. The Boss has a large discography at his disposal but on Record Store Day, four previously unreleased tracks will be made available to the public on a 12″ vinyl.

Dawes/Conor Oberst – Split 7″
Split EPs are fun and there are a lot of them swimming about on Record Store Day. But what makes this one so great is that both bands cover each other (Oberst tries his hand at “Million Dollar Bill” while Dawes give their rendition of “Easy/Lucky/Free”) and they are currently on an extensive tour together. (The Space at Westbury and Central Park Summerstage tickets are available)

The Doors – Weird Scenes Inside The Goldmine
The Doors has always been one of my favorite bands. With their unique genre-blending sound, The Doors remain one of the most influential bands of all time. This is the band I’m most excited to celebrate on Record Store Day, I’m still hoping one day Jim Morrison will come back into the spotlight telling us about how he faked his death 43 years ago, fat chance, I know!

The Civil Wars – Live at Eddie’s Attic
Originally from Nashville, the duo consisting of Joy Williams and John Paul White make up The Civil Wars; a fusion of country and folk blended together. The group won the Grammy Award for Best Country Duo/Group Performance and Best Folk Album in 2012 and have made their way to the top since. I first heard their song on “If I Didn’t Know Better” on ABC’s hit show Nashville last year. They’re also featured on a recent Hunger Games soundtrack with their popular song “Kingdom Come”.

Creedence Clearwater Revival – The 1969 Singles
The amazing Creedence Clearwater can get anyone singing along to their catchy tunes. The legendary John Fogerty is the band’s lead vocalist, primary songwriter and lead guitarist. Brothers John Fogerty and Tom Fogerty (guitar) make up half the band including bassist Stu Cook, and drummer Doug Clifford. Some of their hits include “Proud Mary,” “I Heard It Through The Grapevine” and my personal favorite: “Have You Ever Seen The Rain?”.

The Flaming Lips – 7 Skies H3
Controversial among critics and fans alike, the Flaming Lips’ 24-hour-long “sound poem” 7 Skies H3 has been a cornerstone of my get-shit-done playlist since it came out in 2011. Originally released via USB embedded in 13 chrome-dripped human skulls going for $5,000 a pop, it’s noisy, it’s repetitive, it’s gaudy as fuck, but it is a true epic if I’ve ever heard one. A thorough listen usually takes me a week or two of stopping and starting, but this 50-minute distillation of the piece’s main sections will open it up to an audience that would not otherwise have had the patience or gall to give it a go.