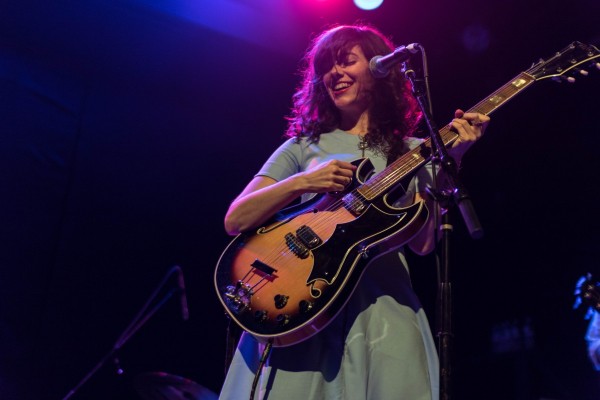 Natalie Prass is a singer-songwriter who caught a real break this year, releasing her self-titled debut in January to sincere acclaim from relative obscurity prior. It’s an interesting piece of work, recorded in Virginia back in 2012 on a shoestring budget, even enlisting the Virginia Commonwealth University’s jazz program to record string arrangements. The album grips you immediately with one of the most powerful songs I’ve heard this year, “My Baby Don’t Understand Me,” and doesn’t let you go until its had its conclusion.

Live, she was backed by a professional band that rounded out to a proper four piece that brought valid instrumentation and vocal harmonizing to her music. Prass herself is quite a character on stage and we adored her for it. One of the oddest, yet charming things I’ve seen in a while was her throwing bananas out into an eager audience with a sudden cry of, “Who wants ‘nanners!?” Chalk that up and a few other improvised moments tonight perhaps to the antibiotics she stated she was on.

On the serious side of things, the actualization of her music was a real treat for me. She sang flawlessly and with true conviction, which the audience reciprocated. It all held up well sans string arrangements; I enjoyed the rougher live version with guitar and bass. Natalie Prass is aggressively touring her album the rest of the year, currently in the Midwest and returning to NYC at Music Hall of Williamsburg on November 10th.

Brooklyn five piece Wilder Maker opened the show with a Western-stylized rock sound. They had a running commentary with a lot of random people in the crowd which gave them a real down to earth vibe that backed up their solid performance. They put out a new EP this year, Everyday Crimes Against Objects of Desire, Vol II, which was mixed over at Gravesend Recordings, which is Ava Luna territory (did you see their recent rarities release?) and a vital part of the Brooklyn scene (Mr Twin Sister, Leapling, Sam Evian whom we’ve covered here recently among many more).