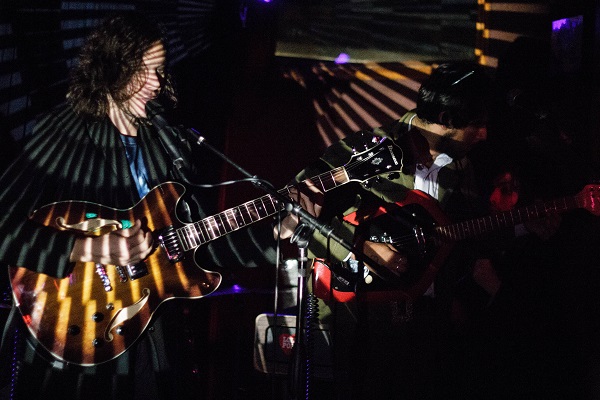 I haven’t been treated to an explosion of live psych rock in ages so I deemed it necessary to venture into the close quarters of New Haven’s Cafe Nine to check out Mystic Braves. To simply put it, this show was loud. Cafe Nine is comfortable cramped, meaning that the venue itself is small, the stage is tiny, but it allows for an engaging and intimate experience.

You can say that I got my first taste of house technical support at this show. The Mystic Braves dance party ultimately got bouncy enough to make their portable tabletop lighting system wobble out of control. But I was there to make sure that vocalist/guitarist Julian Ducatenzeiler and company remained bathed in their constantly hypnotic visual effect.

Their most recent LP, Desert Island, has been available for a little over a year now and tracks like “Bright Blue Day Haze” and the titular track were on point and properly paying tribute to psychedelic garage bands of 60s. It was difficult to make out the vocals, however, making many of the tracks I was unfamiliar with seem to bleed into each other. Nonetheless, the pangy, distorted guitar sounds successfully carried the weight for the instrumentals.

My thoughts on The Blank Tapes are very much in line with that of Mystic Braves. They are another Californian psych rock outfit and they sounded great. But again, the vocals were extremely difficult to discern from the music.

Local group Elison Jackson opened the show and could have had the most memorable contribution of the night just based off the way soul and psychedelic folk collide in their music. Sam Perduta provides deep delicate vocals and the group also features members of Ports of Spain and Wonderbreed. This is an experienced group of musicians and they possess one of the most polished live sounds in the Connecticut scene.