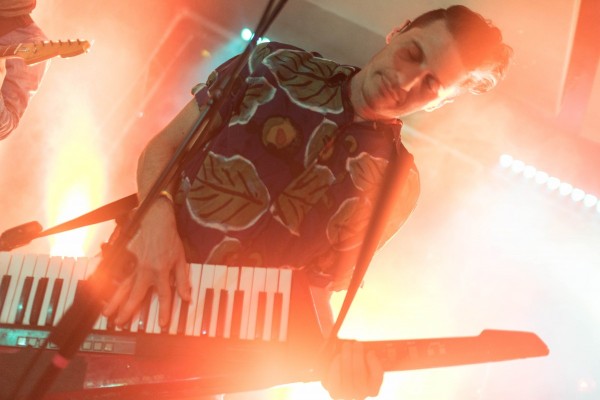 Mutemath has been a beacon in the alt rock space over the past ten years, offering a quirky, energetic and synth-infused sound on the airwaves, and filling massive buildings. The group is on a small venue national tour in advance of their new album, Vitals. Besides the new material, this tour’s setlist was heavy on older songs and off-album favorites, a treat for diehard fans who were ready the second tickets went on sale.

The band is breaking with their long-tenured home on Warner to release Vitals independently on their new label, Wojtek Records, November 13th. The new songs, especially lead single “Monument,” filled in a nice burst during the middle of the set and felt right at home as new additions to the family. They haven’t always been treated well by Warner, having to sue to not be marketed and distributed as Christian Rock at the start of their relationship. I support their new venture, and my expectations for Vitals are at a zenith.

Baby’s All Right was bursting with energy, as expected from condensing a stadium rock into a comparatively tiny venue. I was surrounded with ardent fans shouting all the lyrics, and among the many antics we witnessed, my favorites were Paul Meany (vox, keys) letting us rock out with him on a theremin guitar and Darren King (drums) using us to hoist up his drumkit. They cooled it down a few times for some of their instrumental jams and took a fan’s request for “Control” as well, playing to us in total for over two hours.

Baby’s has been a hot venue almost since its inception, serving as a proving grounds for a lot of Brooklyn’s local outfits and small touring acts. They’ve benefited by lots of their competitors on the Bedford L folding, with Cameo Gallery being the latest to announce, closing next month. That doesn’t mean the venue is any less legit, as I’ve continually espoused attending gigs there. They’ve really become a magnet for rare events like tonight’s and Beach House’s (August) performances. They’ve now got an A/C system keeping things cooler for the really sold out shows.

Mutemath brought a mute man, The Quiet Entertainer, on board to open this tour. His name is a literal reference, as he utters no spoken words save through a text-to-speech, Stephen Hawkings-ish sort of way. He had a pretty sincere humor to his pantomimes and dialogue though. Musically, his beats fit into the mashup genre, and were quite danceable had we more space to work with. You can catch both artists on tour for the rest of the month as they mosey on through the South and California.