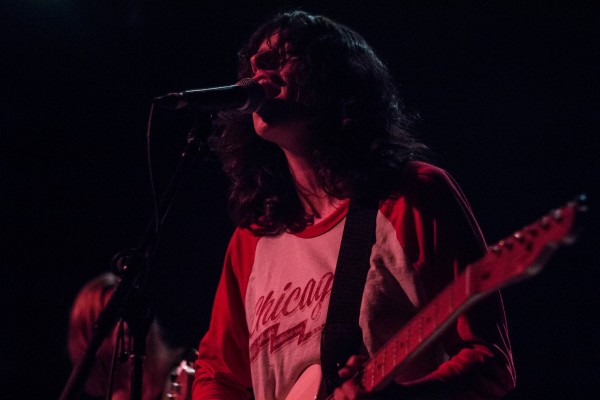 Shana Falana is a shoegaze band from Brooklyn that consists of musicians Shana Falana and Michael Amari. Previously a solo project of Falana, her brand of dreamy pop and lo fi rock is acclaimed across the US and Europe. Her style has heavy Eastern European influences combined with ambient ballads and fuzzed guitars. Amari joined her and the two have been expanding the band’s sound; Amari’s tribal approach to drumming, and Falana’s fuzzy guitar sound and operatic voice create a transcending experience that was well accompanied by psychedelic visuals on a big screen.

Mourn is a young quartet that was formed in Catalonia, Spain by friends Jazz Rodríguez and Carla Pérez. Later joined by bassist player and Jazz’s sister Leia Rodríguez and drummer Antonio Postius. They describe themselves as “Four nerds playing music and shit at the doors of hell.” and their self-titled, debut lives up to that description. Songs like “Your Brain is Made of Candy” and “Misery Factory” capture the band’s affinity for honest and angsty lyrics, in the form of short punk songs with melodic sophistication and catchy angry choruses. Influenced by The Ramones, The Pixies, Patti Smith, and Sleater Kinney, the band has been delivering solid indie rock tunes like “Otitis” (named Best New Track by Pitchfork) that showcase their authenticity and self awareness for the genre that a lot of other bands might lack. It’s impressive how tight and loud this group of young Spanish musicians can rock out in under 25 mins.  Their debut album captured a lot of their live spontaneity and raw energy by being recorded straight to tape in a couple of days. You can check their stuff on Bandcamp and get ready to be blown away by some of the best indie rock you’ll listen to this year.