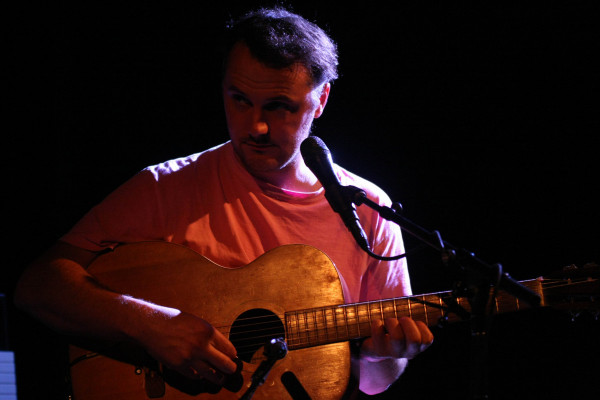 On the more remote side of music there exists Mount Eerie. It’s a project of Phil Elverum’s, a native of Washington state. His music is a blend of folk and ambient, sometimes desolate, frequently themed on nature and always honest. He’s had a prolific output since the project’s inception in 2003, and that continues next year, with a double album called Sauna. His current tour is in support of it, with each night featuring a debut of his new material.

I’m always impressed when an artist can speak softly and keep an audience at rapt attention. Joined by guitarist Carson Churchill, Mount Eerie played without interruption, revering fans silent until applause was appropriate. We heard “Through the Trees Pt 2” and “The Place Lives” from Clear Moon before vaulting off into the unknown. Mount Eerie meandered on for a good hour set and the new material is on point, sounding closer to Clear Moon‘s crisp fidelity than Ocean Roar‘s wash of noise.

Mecca Normal opened the NY shows of Mount Eerie’s tour. The Vancouver duo of singer Jean Smith and guitarist David Lester was an odd, abrasive affair. Singing with lyrics in hand, Smith delivered rambling, aggressive tales which Lester’s guitar gave a punk rock edge to. The music wasn’t for me, but to be collaborators for thirty years on this project indicates they’re going to continue doing their thing regardless of what anyone else says.