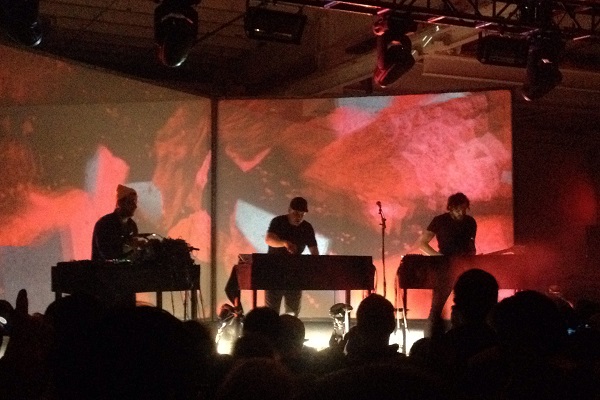 The German electronic project Moderat, a collaboration between electronic duo Modeselektor and electronic musician Apparat stopped by Brooklyn to play a warehouse show. It was probably one of the most fun live acts I’ve ever been to. It was part of their 2014 world tour, and their only show in the U.S. after Moogfest. Moderat plays what some call Intelligent Dance Music (IDM). Mostly downbeat and minimal techno, with deep bass lines and soothing vocals. The performance was a phenomenal visual trip, and most fan favorite songs were played to a massive and energetic crowd that was ready to dance the night away.

Moderat has currently two albums out, Their debut album Moderat was a success in Europe and the U.S. Released seven years after their first EP. It’s an album I best describe as dark and moody, full of experimentation with minimal house, dubstep, and glitch. It’s beautiful and dark, and extremely catchy. II was released in August 2013 under their Monkeytown label and it expanded on their melodic sound, it’s a catchier album that would appeal to a more mainstream crowd without sacrificing the creativity and uniqueness from their debut.

Moderat heads back to Europe to play at the Primavera Sound music festival in Barcelona, Spain and a couple of other shows in Germany and Switzerland. You can listen to their latest single “Last Time” here.