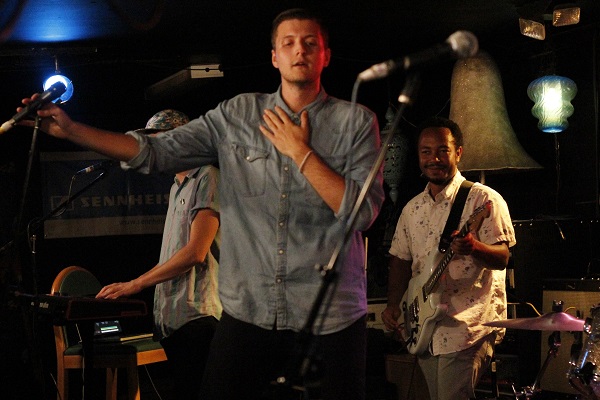 Smack in the middle of a tour in support of their new LP Cruel Runnings, Miniature Tigers made a trip over to Connecticut to play The Space with support from Aussie act The Griswolds and more. Here is a continuation of our coverage of Miniature Tigers that began at The Westway where their tour got started.

New Jersey’s Young Rising Sons was a last minute addition to the bill for the evening. With tons of family and friend support, they took the stage first with some very ear-friendly pop rock. Their material had an anthemic quality to it. It was solid stuff, but  it was simply not enough to stand out too strong in this four-band lineup.

I could say the same thing about Finish Ticket. The Californian six-piece was fun to watch because there was always someone different to watch on-stage. There was a lot more going on instrumentally with extra backing on guitar and keyboard. The depth made them more engaging and they maintained the feel good vibe that Young Rising Sons kicked things off with. But again, it just wasn’t anything I feel like I haven’t heard before.

Coming all the way from Australia to partake in this tour, The Griswolds have “hot ticket” written all over them. While fitting the mold of what you’d expect from an alternative pop rock group in this day and age, they escape that archetype with their slightly tropical feel. The infectious chorus from “Beware the Dog” and a “be impressive” chant in the same vein as “be aggressive” highlighted a very exciting sit. Frontman Chris Whitehall headed things up, and along with the rest of his band, exuded plenty of confidence. Don’t be surprised if The Griswolds are selling out larger stages in America sooner than later.

I always was into the material of Miniature Tigers, but I didn’t realize they would be such fun performers. Spearheading the entertainment effort was vocalist/guitarist Charlie Brand, who spent some time in the audience, made U2 jokes, and ensured that we were all feeling subtly riled up by the end of the night. As for the music, I’m really into the way this band has evolved over the years. Their experimental nature has clearly diminished over the years. What Miniature Tigers hasn’t let get away from them is their charm. Their synth pop sound, now prominent on Cruel Runnings is sweet and timely, being worthy of everyone’s summer soundtrack this year (see “Swimming Pool Blues”). I just liked that they were able to seamlessly cover material, new to old. “Cannibal Queen”, “Boomerang”, and “Used To Be the Shit” may all represent different eras of Miniature Tigers, but it all flowed very well live.

So jelly of your lighting here. Ha.