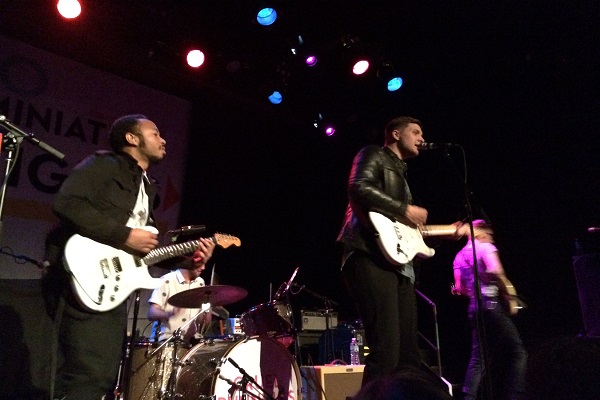 Miniature Tigers have been a strong contender in my personal contest for which indie rock band I’d enjoy dancing to most for more than a few years now. Their guitar strums, soft vocals, and prominent keyboard melodies are strong recipes to get people up and grooving. After a couple quiet years, Mini Tigers have just announced details around their next album, Cruel Runnings, out May 27th via YEBO. In an effort to get their blood pumping, they’ve started a co-headlining tour to warm up for its release. Bear Hands are their partners in this, and I have to say that Mini Tigers have picked well there.

Bear Hands’ music constantly veers between abrasive and soothing, and that dichotomy makes them very interesting on stage. The band is a quartet, with a solid emphasis on percussion. The air seemed charged for a mosh pit, though one never kicked off. Bear Hands just released Distraction, their sophomore record; its an inspired release that bolsters their repertoire up to the point where they can start playing some serious gigs on their own, as seen in their scoring a spot at Coachella next month.

Mini Tigers live shows are usually wild parties, but tonight was a little more somber. Singer Charlie Brand was oft humble and thankful to the dedicated fans in the audience, and we had a lot of first listens from Cruel Runnings, which all sounded on point to me. Not to say it wasn’t a blast, plenty of greats from their earlier albums were played, and their set concluded with a one-two punch of “Cannibal Queen” and “Sex on the Regular“. Mini Tigers continue their tour southwards with aims towards SXSW, and I imagine they’ll be back playing shows here in summer once their new record has had time to gain some traction.

Supporting along the lengths of this tour is Total Slacker, a four piece who blend garage rock and psych vibes from Brooklyn. They fit the part aesthetically, with their long tees and casual wear on stage, but definitely don’t cut corners when performing. I dug their longer and louder songs where they pushed close to the edge of thrash, and the audience near me reciprocated their energy in turn.

Before Total Slacker, a charming duo named Jack and Eliza opened the show. They specialize in a mellow brand of folk that features vocal harmonies over downtempo guitar. The twosome only have a couple demos online currently, but what I heard live sounded very sharp. I’m hoping they bolster their recordings very soon.