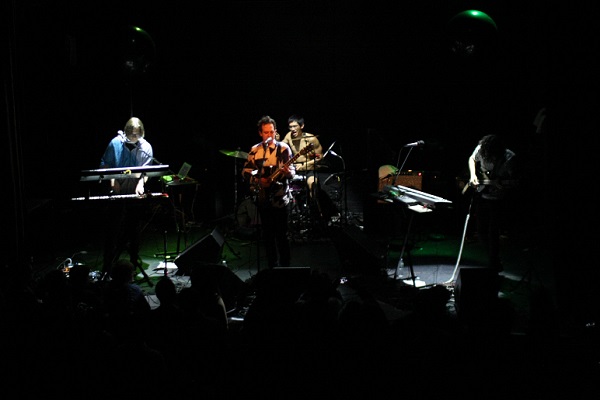 Thursday April 10 saw a trio of Brooklyn groups, all with a different sound, band together to support the release of headliner Milagres’ sophomore full-length, Violent Light at the Bowery Ballroom. Up and coming indie dance act, Leisure Cruise, and Conveyor performed in support.

Without much advance knowledge of their makeup, Leisure Cruise delivered a standout performance. For a first billed opener, they possessed a strong foundation. Lead vocalist Leah Siegel, from the band Firehorse, and Dave Hodge, who has worked and toured with Broken Social Scene, joined forces around this time last year to create some cool dance grooves. Leisure Cruise has the makings of a prominent spacey dance act.

Their formidable experience was evident throughout the set. Siegel provided powerful vocals and Hodge crafted the engaging electronic side of things. With backing from a guitarist, drummer, and a wind machine, the whole set, and Siegel’s hair, flowed wonderfully. Check out their set closer, “Double Digit Love“.

Having seen Conveyor once before, I was prepared for their idiosyncratic performance style. The way vocalist T.J. Masters bluntly and properly introduces the band and certain tracks is rather unorthodox, but I once again found the unique formality endearing. They perform rhythmic pop rock with some of their material reminiscent of early Vampire Weekend. Some of their offerings, like “Mammal Food“, can be scuzzy. Others like “Right Sleep” play out as if Masters is storytelling and the instrumentals serve as illustrations. That track also featured some great live harmonies and falsettos.

Fronted by Kyle Wilson, Milagres wasted little time with theatrics and jumped right into “The Letterbomb“, a psychy stomp of a track that could be viewed as the backbone of Violent Light. The new LP, being the focal point of the show, was featured prominently and shows how Milagres has evolved into a group that isn’t just another Brooklyn indie outfit. Wilson’s range and captivating falsettos fueled some of the biggest crowd-pleasing moments of the evening.

The forward progression of the band was noticeable with more powerful synth passages, killer drum hooks, and rhythmic melodies. Tracks like “Perennial Bulb” and “Jeweled Cave” had all those things while generating catchiness. The live renditions proved to be strong and the feels were there as well for their closing track, original hit, “Glowing Mouth”.