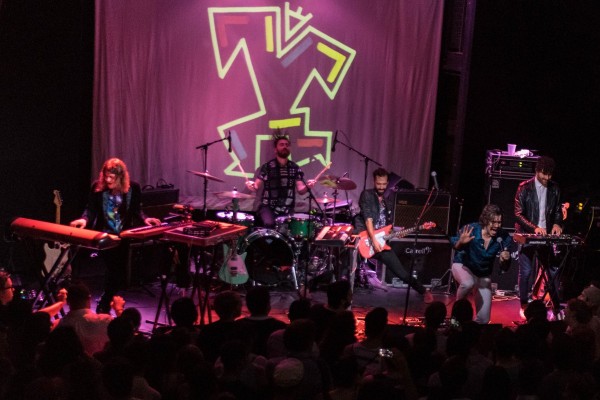 2015 is the year of Miami Horror truly delivering. The band’s leveled up with the release of their second album, All Possible Futures, and with its release is due a proper tour, with their first primetime NYC shows since the very first Governor’s Ball. Our enthusiasm runs deep, we interviewed Ben Plant, the band’s progenitor, and included their latest single, “Love Like Mine,” in our previous episode of Beet Box Radio. The group played two heavily sought after shows at the relatively intimate Rough Trade, and accompanying those shows is a live performance redone. This band has always nailed the translation to the stage, being very ardent in transforming from an electronica heavy studio sound to rock instrumentation. To see that process evolve and improve further impresses me.

What’s most interesting about Miami Horror’s latest changes to the live show this tour is that they now have two frontmen; Josh Moriarty is now joined by Aaron Shanahan in marshaling the crowd and delivering vocals. It’s something approaching sensory overload watching these two bombastic dudes, who exude rock star energy, competing for our attention. Moriarty goes high, climbing everything in range while Shanahan is in the thick of the audience singing a chorus. It’s great. The last core member, Daniel Whitechurch, keeps things mostly level with the keys but occasionally was spotted whacking a cowbell to great effect.

The band has also levied some intriguing, psychedelic visuals, which my photos don’t really do justice of, and enlisted a fifth member on drums for live shows, Kosta Theodosis. After shows in Tennessee tonight and a Fourth of July bash in Atlanta, the group heads home to Australia, and will be touring there in August. I imagine they’ll return here a few more times over the next years, to much fanfare from us and hopefully some larger venues here in NYC. I have them pegged to take on a venue the size of Terminal 5 on their next visit here.

BASECAMP, an electro-R&B trio out of Nashville, opened along the latter half of the tour. Their vocalist, Aaron Miller, contributed to “Cellophane” off All Possible Futures and joined the band on stage for the song. I’m a big fan of theirs since 2013’s self-titled EP, and tonight was a great opportunity to finally see them perform. Their music had a noticeable impact in revving the audience up around me. The independent act’s latest can be found on their Soundcloud.

Earlybirds could catch Eiko Hara opening tonight. The Japanese vocalist and DJ, backed by a full band tonight, is a local act that gave us a downtempo, slightly off-kilter set of pop music. Online info is scant about her performing act, but I really enjoyed “Blood Type B” from her set. Sublime and catchy as all hell that track is.