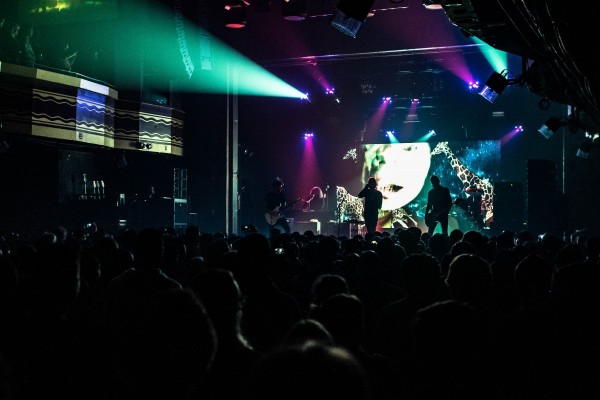 Throughout the world, there are few rock bands like Denmark’s Mew. The troupe walks a knife edge between melancholia and the uplifting that has some really inspiring musical moments. Earlier this year, they released their sixth record, +-, on PIAS and visited Texas for SXSW in advance of its release, leaving NYC in the cold until this weekend. They played their first show in six years here to a packed, hyped crowd at Webster Hall.

Mew’s live energy was actually quite surprising. As someone who tends to dwell on their calmer tracks, I walked into tonight forgetting the high tempo and instrumentation that actually is a foundation for much of their music. Jonas Bjerre, Mew’s vocalist, keeps a deliberate, calm demeanor while the rest of the band shreds guitar. Up close for +-‘s lead singles, “Satellites” and “Witness“, I had a treat watching their enthusiastic musicianship before resettling in the back.

Distant from the frontlines, it’s often hard to get involved in a rock show’s mysticism. However, from my vantage point I was able to gather in the creative visuals that are a part of the band’s aesthetic. Bizarre caricatures of people and animals parade around in them, not unduly surprising for a band that likes to stylize themselves as cartoon eggs. Who knows what it all means, but they’re fun to observe.

Kimbra made a few surprising appearances tonight. The “Somebody I Used to Know” foil turned worldwide superstar contributed vocals on +-‘s “Water Slides” and “The Night Believer,” and joined the stage both times to sing in a duet with Bjerre (though bassist Johan Wohlert’s singing was also prominent.) NYC definitely got a special treat if that was the only show on tour with her appearing.

“The Night Believer” was the first part of an encore that would then lead into Mew’s most epic track, “Comforting Sounds,” to close out the night. The song simmers slowly, ascending in complexity until hitting towering heights with a soaring instrumental conclusion. I had an electric charge going down my spine as Bjerre bid us farewell as it peaked. A truly appreciative and roaring applause filled the ballroom at its conclusion.

Props to The Dodos, who were on tour with Mew throughout the ‘States. The band’s cool enough that we also caught them as headliners in CT back in Winter; my own personal exposure left me enthused with the duo’s energy and melodies. A warm tone was set from the onset when Meric Long humorously powered through a broken string right on their first song. Their latest was earlier this year, Individ, on Polyvinyl.