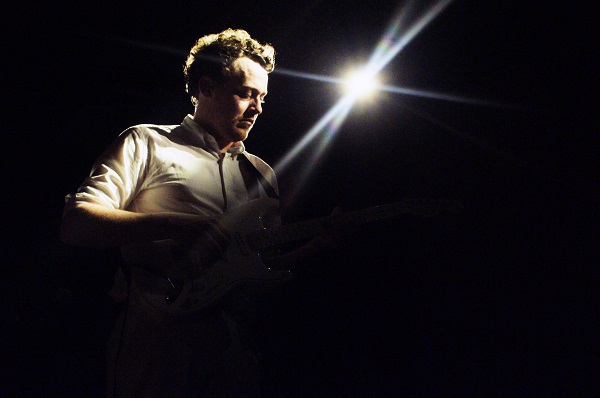 With the March tenth release of Love Letters quickly approaching, the members of Metronomy have been doing their rounds in order to promote their new album. February fifth found them in Brooklyn playing an intimate sold out show at the Music Hall of Williamsburg, which featured new modifications and additions to their unique live performances.

After a sparsely lit and pleasant, yet understated DJ set by opener The Range (James Hinton), the members of Metronomy (now a five piece thanks to the addition of Michael Lovett) took their places behind their newly re-envisioned minimalistic stage setup. Along with changes to the layout, their previously noteworthy onstage outfits featuring chest-mounted, synchronized lights had been dispensed with in favor of a new, subtler dress code consisting of uniforms of burgundy blazers over otherwise all-white ensembles. As the lights washed over the band’s outfits; white sheet backdrop; and the clean lines of the podiums, these newer elements were imbued with color, resulting in a vibrantly polychromatic stage show.

The evening began with new tracks from Love Letters, which would be played almost in its entirety as the night continued, in addition to tracks from both fan favorite Nights Out and Mercury Prize nominated The English Riviera. Tracks chosen from the fourth LP seemed to exhibit an attempt by Mount to try something different, while at the same time, ultimately remaining recognizable. As they worked their way through the setlist, enjoyment was visible in both the performers and the audience. Drummer Anna Prior’s smiles and dance moves demonstrated by multi-instrumentalist Oscar Cash and bassist Olugbenga Adelekan were definitely highlights. And despite the amount of unfamiliar material performed throughout the night, the audience was also eager to participate regardless of what Joseph Mount and company had in store for them.

Judging from the quality of the night’s performances and overwhelmingly positive response elicited from those in attendance, it seems that Love Letters is well on its way to becoming yet another staple in Metronomy’s already formidable discography.

The album debuts on March 10th, check out the music videos for “Love Letters” and “I’m Aquarius“, and catch them when they cycle back here on May 14th at Webster Hall.