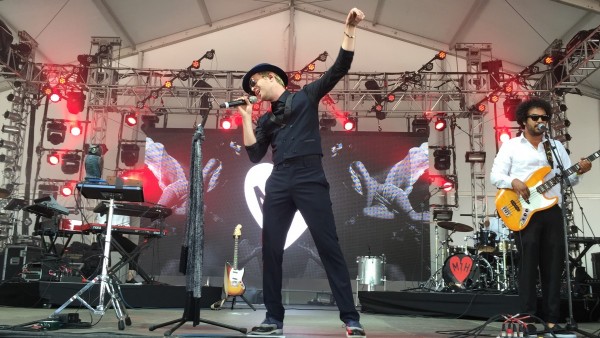 I’m certainly a fan of traditions, so in keeping with them, I am again listing off my ten favorite live performances of the year, just as I did for my favorite albums list on Monday. I was oh-so-close to 100 live acts this year, and while that still gives me a goal to shoot for next year, I still have a long list from which to draw out a few outstanding selections. This year’s collection features ten shows, each in different venues, which going to two festivals and moving to a new city certainly assisted with. This is my last article of the year, so Happy Holidays Neat Beeters, and I’ll see you in 2016!

A surprise show announcement on a Monday brought Death Cab for Cutie to Music Hall of Williamsburg two days later, an unbelievably small stage for such a big draw. Those few hundred of us privileged enough to be in the building were treated to a masterful performance by Ben Gibbard and the rest of the band. They played songs from nearly all of their albums–a jaw-dropping 22 tracks in all–including three songs from their new album, Kintsugi, which came out a couple months after this show in March. The energy was absolutely electric from start to finish, kicking things off with the long version of “I Will Possess Your Heart” and ending with a flourish with their driving classic “Transatlanticism.” Because this performance was pretty much a compilation of DCFC’s greatest hits, and that their next NYC show was in the substantially larger Madison Square Garden, this was an especially amazing experience that I will long remember.

The Bowery Ballroom faithful was treated to a night of high energy from two great performances at the end of March. BØRNS was first up, and following his performance of “Electric Love” on Late Night with Seth Meyers the night before, he mesmerized the crowd during his second to last stop on Misterwives’ “Our Own House” tour. Besides playing songs that would ultimately be on his debut album, Dopamine, the highlight of his set was his fantastic cover of Elton John’s “Bennie And The Jets.” Headlining the show was the aforementioned Misterwives, who kept the party going late into the night with lead singer Mandy Lee’s boundless energy, which definitely got the crowd going. It was a homecoming for the band, as they hail from NYC, and Lee’s family was in the audience as they performed a multitude of songs from their debut album, Our Own House.

High energy is certainly a theme for this list, and few brought it with more old-school style than Mayer Hawthorne during the last day of Governors Ball this past June. Deeply influenced by soul music, Hawthorne blends the classic sounds of the 60’s and 70’s with a modern flair, and was easily one of my personal favorites over the course of the three-day festival on Randall’s Island. He covered a couple songs, including a surprisingly good cover of Aerosmith’s “Walk This Way,” but the best part about his set was that most of what he played sounded like they could have been covers of older tracks, even though they weren’t. It’s tough to pick just one standout memory from his set, but hearing “The Stars Are Ours” with Hawthorne, his rhythm guitarist, and bassist dancing in sync on stage was pretty awesome.

If you ever have the good fortune of getting to see a member of The Beatles perform live, there is no question that performance goes on a Top 10 list of favorite shows of the year. The organizers of the Firefly Music Festival definitely understood this concept, as they completely shut down the festival grounds for two and a half hours, leaving only the Firefly Stage in operation for the rock legend Paul McCartney to do what he does best. There is never enough time to play all of the great Beatles/Wings songs in one show, but man, did McCartney perform A TON of them. With apologies to the great performances of “And I Love Her,” “Eleanor Rigby,” “Blackbird,” “Come Together,” and “Imagine,” the best moments were the Wings classic/James Bond song “Live and Let Die,” set to fireworks for added effect; and hearing the entire Firefly congregation serenade Paul during “Hey Jude.” This show was an absolute all-timer.

This particular show served as a proper going-away present for me, as I moved out to Boston the following day, and there aren’t a lot of better ways to spend my last few hours in NYC than listening to the soul/jazz/R&B fusion that is The Internet. Creating a sound that is distinctly different than the hip hop collective of which they are a part (Odd Future), Baby’s All Right was treated to a super chilled-out vibe as the band was still celebrating the release of their newest album, Ego Death, which came out only days earlier. Vocalist Syd tha Kyd and her counterparts were having a great time on stage playing nearly all of the tracks from their new album, most notably the groovy, yearning “Girl” and the smooth, bass-heavy “Special Affair.”

A band who made an appearance on my favorite albums list last year, Glass Animals played a fantastic (and free!) sold-out Sunday afternoon set at Central Park’s Summerstage. It was the second time in two months I had seen the band, previously in June during the Firefly Music Festival, but it was this show that was the standout performance. The weather couldn’t have been more perfect for Glass Animals’ “peanut butter vibes,” and the crowd atmosphere welcomed every offering with open arms, especially with a multitude of large beach balls bouncing throughout the audience. Among the highlights of their set was their inaugural performance of a brand new song called “Gold Lime,” which craftily covers both Yeah Yeah Yeah’s “Gold Lion” and Erykah Badu’s “The Healer.” Make sure to check out the wonderful shots Neat Beet editor-in chief John Harrison took during this show for a deeper look.

The only one of these shows that wasn’t sold out–and the first Boston coverage for Neat Beet–the small group of patrons in attendance at Great Scott was treated to two talented performances. Opening the show was Eliot Sumner, the daughter of The Police frontman Sting, who played an unusually long 10-song set for a non-headliner, but the audience was all the better for it. With a voice that oddly mirrors her father’s, she and her band played so well that we wanted them to come back for an encore performance. Taking us home that night was the morose, emotionally charged band ON AN ON, who started the set with the somber And The Wave Has Two Sides opener “Behind The Gun,” and kept the mood enjoyably gloomy for most of the night, especially with the need-to-hear-it-live “Drifting.”

I could have easily written about Purity Ring earlier in this article, as John Harrison and I saw them play a wonderful show with Braids at Terminal 5 in early June, but they amazingly found another gear as the show they played at the House of Blues in Boston in late September was nothing short of mind-blowing. Megan James and Corin Roddick’s live production somehow got better in just a few months, and along with their trademarked usage of lights during their show–the curtains of LED lights were a phenomenal touch–their set hit the right cord with the audience, as the sold-out venue was exploding with energy. Purity Ring played nearly 75% of all their songs, including the entire Another Eternity album, but for my money, it doesn’t get any better than hearing “Lofticries” live, especially from the front row.

It was a privilege to see 19-year-old, British electronic singer-songwriter Låpsley play only her second NYC show in early November, captivating a sold-out Rough Trade with her understated ambient beats and powerful, heartfelt vocals. There wasn’t much of a rhythm to her set due to the slow, hushed melodies she creates, but it pleasantly served to highlight each song as an individual entity, letting them stand out on their own. There is a raw talent to her voice and her craft, as she periodically uses vocal distortion to add a bass-like dimension to her music, and when she belts out songs like the piano-led ballad “Falling Short,” the silently enthralled crowd tells you all you need to know about her potential as an artist to watch out for in 2016.

Yet another artist who I happened to see twice this year, Allen Stone’s show at Brooklyn Bowl in late May was simply an appetizer to an even better one which he performed in Boston at Royale. His live set includes a full band, but it’s the unabated energy and deep passion that Allen Stone plays with that takes his music to a higher level. He loves to get the crowd involved in his shows, allowing the audience a moment or two to take pictures before encouraging everyone to experience the evening together without technological distractions. Stone played most of the songs from his new album, Radius, along with some from his self-titled 2012 release, but the high point of the show was when he brought out opener Bernhoft to sing “Million” with him as a duet, pleasing everyone in attendance. Stone ended up transitioning into his very own “Hey Jude” moment during the song when he got the whole crowd to sway with their arms around each other’s shoulders, repeatedly singing the lyrics: “I want some free love/I want some free love/Give it to me.”