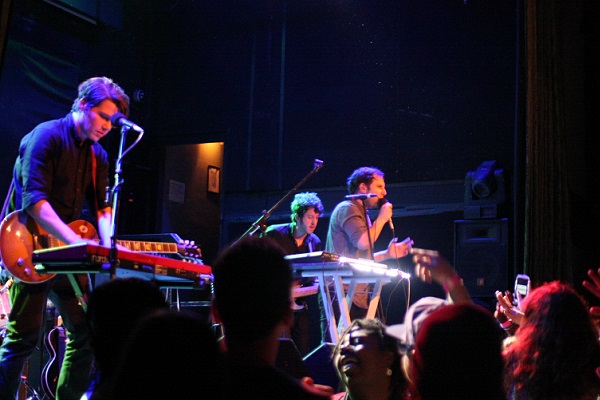 2014 is merely hours away from being a thing of the past. Before time runs out, I’d like to reflect on some of individual tracks that perfectly defined this year in music for me. These are the tunes that got stick and in my head and simply would not leave, and still haven’t left. Here are roughly 20 plus tracks that got me through the past 12 months.

Ariel Pink – “Put Your Number In My Phone”

The triumphant return of Ariel Pink, and a typical Ariel being Ariel kind of track. You have to love the voicemail from the annoyed girl he had evidently been blowing off for a while.

Female-led punk rock took a magical turn this year when we caught wind of the Sleater-Kinney’s comeback. It was around that time that his gem from this Nashville four-piece surfaced. All two minutes and six seconds of it present moshworthy material.

In my opinion, this Seattle duo was the most undercovered act of the year. Ideally they can burst onto the synth pop scene in 2015 with their uniquely industrial sound. This catchy can lead their charge into notoriety with its deliciously catchy electronic hooks and it’s somber vocal messages “I’m not who you should want/I’m gonna beg you not to love me.”

I’ve latched onto Dinowalrus’ 80s alt-rock infused brand of synth rock about a year and a half ago and didn’t let go. This track comes from their second full length album, Complexion, released earlier this year. It rocks and it will make you dance.

Never necessarily a go to band for me, iceage dropped this track which possesses a compelling vocal quality to me first and foremost. It sounds almost snide to me, with the whole “Lord’s favorite” attitude.

Jenny Lewis – “Just One of the Guys”

Jenny Lewis’ solo career completely blew up with this track. It’s one of the sweetest songs of the year with probably the most memorable chorus. The star power that joined forces with Jenny to film the video was also fantastic.

This track has been a bit polarizing from what I’ve heard from others, but it is so different from anything else I’ve heard all year. With some clever video game music sampling, and a message that ensures that girls belong in the gaming world, I just love everything about this track.

It’s hard to classify Merchandise in any particular sect of music other than maybe noise pop. All I know is that this track evokes memories of the early 90s and sounds like an evolved form of REM, Peter Murphy, Men at Work, or something along those lines.

I definitely needed to give Milagres and their third album, Violent Light, some much-deserved credit. This track a flawless spacey buildup that drops into chill, spiraling rock groove.

Brill Bruisers produced some incredible tracks, but this one was the most rock-charged track by The New Pornographers, maybe ever. It’s like Cheap Trick on steroids, and I get chills anytime I hear “there’s another West” in any context now. It is an amazing song.

Welcome back Panda Bear. Welcome back quirkiness. It’s impossible to not get lost in this echo chamber. You don’t know exactly what you’re listening to, but its melodic, hypnotic, and the experimentation its absolutely welcome.

Run The Jewels – “Close Your Eyes (And Count to Fuck)”

This track comes from arguably the best album of the year, something I can’t help but stand by. Killer Mike and El-P kill it on this track that will get you fired up whether you like it or not. The Zack de la Rocha portion of this one is on point as well. I could rattle of some of my favorite verses from this but I would be going on and on for paragraphs.

When I had found out that Small Black was collaborating with Frankie Rose on a few tracks so soon after Limits of Desire, I got understandably excited and my hopes were set high. Real People in no way disappointed.

This track comes from Snowmine’s Dialects, one of the chillest yet most effective albums I listened to this past year. “Rome” is a jam has a sort of relaxed sound but is immensely engaging at the same time.

Spoon has finally found a niche. I’m not so sure if they’ll utilize the harp ever again like they did in this track, but that’s okay because the solos are absolutely glorious. The song, and others on They Want My Soul, tower over an otherwise average discography. Well done, Spoon.

“Prince Johnny” dialed things down and is definitely the grooviest track from St. Vincent’s self-titled album. Annie Clark drops some amazing vocal fluctuations into this tune’s chorus and left a more lasting impression on me.

Sometimes some of the most simplistic beats and lyrical combinations come together to form a powerful indie pop track. The song works off a number of unique influences.

All I can say is that Ty Segall’s Manipulator is phenomenal and I couldn’t possibly choose just one of these three tracks to mention here. “Feel” has about a minute of some of the best guitar railing I’ve heard all year by far. “It’s Over” is a total romp. “Tall Man, Skinny Lady” has a lead guitar riff that carries on throughout the track and doesn’t get old.

I’ve always been more partial to anything drenched in synths. Without over-analyzing, I just love how this song sounds and the way it breaks down in the end.

This is a quick track about a catapult named after Jupiter’s moon IO. Not only that, Nick Zammuto offers up a strong vocal performance with super awesome percussion.