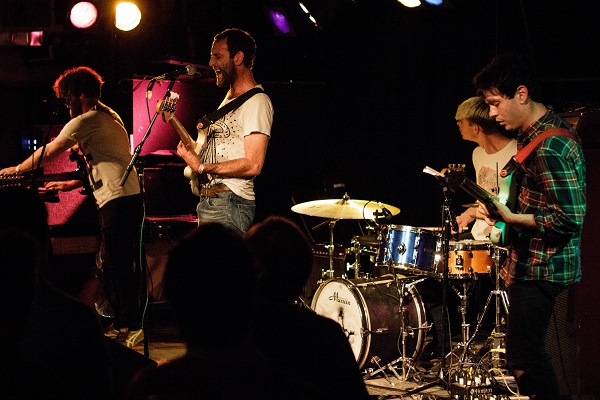 I’m not really competitive and into lists and all, but it is that season after all. So I’m stoked to share a super subjective list of albums I’ve compiled that I’d consider my total favorites from all of 2015. I cut it to 15 because I would be writing for days if included all of the amazing releases of the year. Here is what stood out to me the most and truly commanded my attention throughout all of 2015. Listen in via Spotify while you read; I compiled all of my favorite tracks from these albums there.

See now, this is what I call experimental. Algiers combines post-punk and gospel values to create something remarkable that I’ve never heard before. It’s melancholy and almost surreal at times, and there is this quality to it that sucks you in. Gospel music isn’t exactly in my wheelhouse, but when it carves its way into jagged guitar hooks on “Black Eunuch”, it is evidence that Algiers is something special.

Master of the “Call It Off Relationship Hotline”, Shamir cracks my list with a debut album affectionately called Ratchet that features all the bouncy dance electronic indie you need to “Make A Scene”. His androgynous voice is sounds phenomenal on the album and sets him apart from the rest of the scene.

London band Shopping gets me so fired up. The sort of surf rock/post-punk released Why Choose in 2015, a record loaded with quick and catchy riffs that force you to get up and dance around. Hit up the playlist above and listen to “No Show”, I found it to legitimately be the catchiest song I’ve heard all year. The rest of the album has conveys a sense of urgency that gets you in the mood for its pacing.

I was extremely concerned that Chvrches hit the highest of highs and peaked overly early with The Bones Of What You Believe. It turns out I was dramatically incorrect. What we learn from Every Open Eye is that Lauren Mayberry and company have gained even more confidence, and that notion is echoed through each track on on the new album. Mayberry’s vocals come front and center and are as commanding as ever. Every Open Eye doles out something for everyone whether its fist pumpers like “Clearest Blue” and “Bury It” or more  traditional sounding songs like “Leave A Trace”.

2015 brought a new Kurt Vile record that saw him level up lyrically and instrumentally. You have to love the existential battle within “Pretty Pimpin”: “But it was a Monday, no a Tuesday, no Wednesday, Thursday, Friday
Then Saturday came around and I said Who’s this stupid clown blocking the bathroom sink?” This collection of bluesy folk jams is not to miss.

Sweetest beets: “Pretty Pimpin”, “I’m an Outlaw”, “Life Like This”

Catching a live Jamie xx DJ set should be everyone’s priority now that we’ve heard what he’s capable of on In Colour. The album is laced with attitude and hitworthy material. Jamie xx is capable of a whole lot musically and this album is only a Pandora’s box for what is yet to come, whether it is more solo material or taking The xx in a wild new direction. “I Know There’s Gonna Be (Good Times)” is one of the classiest tracks to bust out of the indie electronic scene all year and it anchors an extremely tight record.

I don’t think it gets more chill than Bob Moses. Their strong electronic debut record  consists many moody themes and is most appropriate for your ears when you’re in some type of mood. With a strong production quality and deep moving tracks like “Tearing Me Up”, this may be your electronic/house album of the year, if silky smooth beats are what you are seeking out. All I’m saying is that this LP is super easy to listen to and a whole lot of fun as well. Check out John Harrison’s sick photos from the band’s show in September.

Sweetest beets: “Like It Or Not”, “Talk”, “Keeping Me Alive”

8. Sleater-Kinney- No Cities to Love

I’ve grown to appreciate Sleater-Kinney to a point where I consider them one of my favorite bands and view them as sort of founding mothers of a great deal of music I listen to. That’s why I was immensely pleased that their comeback record, after a decade off, sounded as though their hiatus hadn’t existed. Vocally, Corin Tucker and Carrie Brownstein are as spunky as ever and most of their new tracks are anthemic in way that taunts: “we’re baaaaaack”.

Post-punk quartet Sauna Youth is another one the least household names cracking my 2015 rotation. What London-based group shows is me is that traditional upbeat post-punk wit garagy overtones still exists in its simplest and most effective forms. When Distractions kicks off with “Transmitters”, I’ll just be sitting their with my headphones in compelled to jump up and down like an idiot. That, is strong post-punk to me. Give these guys a shot, they haven’t circulated the U.S. airwaves nearly as wells as they should be.

Things get crazy loud on the third studio album from HEALTH. I especially dug the strong industrial influences on some of these new tracks. But Death Magic is pretty much banger after banger with some sentimentality sprinkled it. The uplifting “Life” is a lyrical paradise: “Life is strange, we die and we don’t know why”.  You also have the drug-induced “New Coke”, where as it turns out, “life is good”. It was long wait between albums from these guys but it was worth it.

Bernard Sumner used to “see delight in the shade of the morning sun”. He’s now changed his tune to: “I feel like I’m a setting sun”. It seems sort of symbolic in terms of New Order‘s progression over the years in that their newest full length simply pays respect to the band’s past while comfortably modernizing. Despite the Peter Hook drama, New Order has returned to the scene with their most exciting LP since their glory days. Their collaboration with Elly Jackson has particularly stuck with me, as evidenced by the sweetest beets below.

Might as well refer to this band as Viet Cong while we still can as their inevitable name change is on the horizon. Controversy aside, the arty post-punk band that evolved from Women  produced a collection of complex melodies and razor sharp riffs. The most delightful aspect of the album is the pacing. The slow build up reaches a climax in the final track of the album “Death” after a bunch of lurching guitar hooks, the momentum comes crashing down in your face in a last minute frantic frenzy. The ride along the way is equally rewarding to the ears. I caught them live back in June, check out the full photo set.

Art Angels is essentially Grimes keeping it 100% real. It is truly what she envisions her ideal output to be, and to have the stones to straight up go for it like this, she deserves endless applause. This is what I wished all pop music sounded like. The album tracks we’ve their way through vocally driven songs and total club bangers, which are impossible to get enough of. The amount of times I’ve listened to “Kill v. Maim” over the last few weeks is downright disturbing. But Grimes has busted out of her shell of shyness and revealed some wicked personality, and Art Angels is the totally killer product.

From the moment “Water, Water” was released  back in the spring, Lorely Rodriguez commanded my attention under the moniker Empress Of. Her debut full length album Me is seamless 10-track effort that takes electronic avant-R&B to an entirely new level. She has proven herself as a powerful lyricist and vocalist with this material.
Rodriguez sings “Just need myself to love myself”, and this need for independence seems to resonate with me. She is so easy on the ears that during some listens to Me, I find myself just listening to what she has to say. But during every other listen I’m thrown into a dizzying trance

Tame Impala took their established psych rock brand and spun it in a whole new direction, and for that I’m comfortable with naming Currents my favorite album of 2015 and overall favorite in a long time.  Replacing the fuzz with jangly indie pop frosting spread over a delicious cake of electronic grooves was a genius move. “Let It Happen” was the epic single that started the madness and will be synonymous with “indie music in 2015” for years to come. My one gripe with the album is that bumper-ish tracks like “Nangs” and “Disciples” are absurdly good and deserve better than to be as short as they are. Give me more of this.

Sweetest beets: “Let It Happen”, “The Less I Know The Better”, “Disciples”

Love the selections, Matt. Currents and Me were special albums for sure.