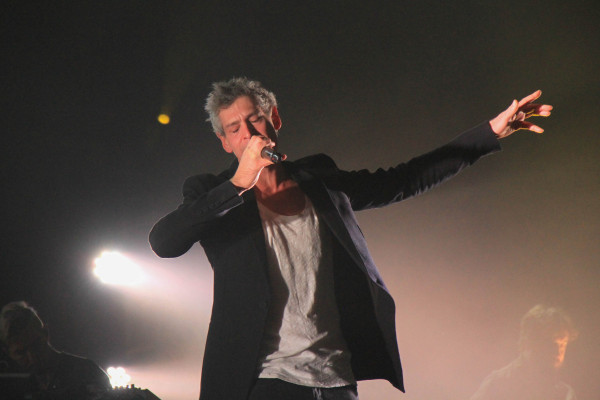 Not many artists can seamlessly merge the worlds of Orthodox Judaism, Rap/Reggae and Alt Rock quite like Matisyahu. After making his biggest splash on the charts in 2005 with his hit, “King Without a Crown,” he has released three new albums, shaved the beard and artistically evolved into even newer musical waters. In support of his latest album, Akeda, and for his growing Hanukkah tradition of bringing the house down, Matisyahu played to an energetic and diverse crowd at the Paramount.

The set began with more intimate tones of his repertoire that put him center stage in the subtle, ever changing light. Invoking a cantor’s presence and cadence, his energy grew with the crowd up to the rafters. All at once, the atmosphere changed as his accompanying band came to life behind him and started playing a string of more high energy and familiar crowd favorites.

It was during these songs that the true spectacle came to fruition. A massive bank of spotlights illuminated a dreidel-disco ball spun spotlights around the cavernous Paramount. An oversized menorah was produced and lit with the help of special musical guests & Hassidic artists from Manhattan. Bringing the festival of lights celebration to the crowd would not be enough for Matisyahu on the 6th night of Hanukkah. At the grand finale, he invited everyone onstage to take part in his celebration! A frenzied rush of concert goers mobbed the stage to absorb the artists’ perspective, and take a few selfies to prove the experience. This is where I found Matisyahu most in his element, happy to be surrounded by so many dedicated fans.

You don’t have to be Jewish to be blown away by a Matisyahu show, especially if you find yourself at one during the holidays. If you have the opportunity to go to a show in support of this album or any future ones, I highly recommend it. Shout out to Oogee Wawa, the homegrown talent who opened the show with their own brand of aggressive alt hip hop and set it off with a great energy.