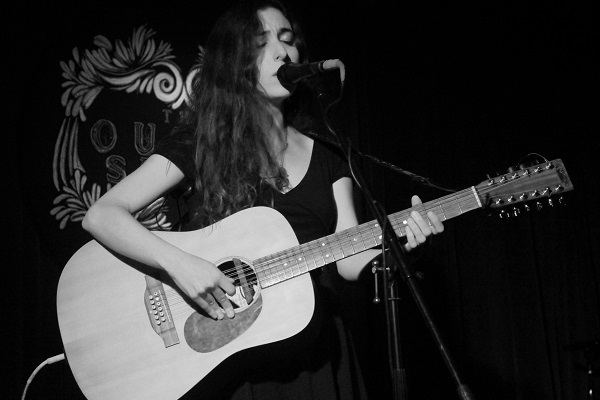 If you ever needed a chill live show to help you wind down on a Sunday evening before the new week picks up, Marissa Nadler served as a great example, having brought the goods on July 20 at The Outer Space in Hamden, CT. In a laid back, lounge style setting, her songwriting and guitar were an absorbing focal point.

Connecticut-based duo, VIOLENT MAE opened the show. There was a remarkable cohesion between Becky Kessler and Floyd Kellogg. Kessler’s voice and guitar are a great pairing that made for sweet harmonies. Every now and then Kellogg would break into an enthralling outburst on drums as well. They tossed some new material into the set, some of which could be released in the near future. I’m certainly looking forward to it because each new song allowed some space for each instrumental piece to flourish.

The timing of Marissa Nadler’s current tour dates couldn’t be more appropriate, given the name of her latest LP, July, which she heavily featured in this set. There was a superb balance of beauty and eeriness within her live material. Part of this stems from her backup cellist, which generated some added whimsical flair. Another part of this was due to Nadler’s powerful vocal range that was instrumental in delivering dark thoughts in tracks like “Firecrackers“. The live material was very stripped down compared to any studio work from Nadler, but it was an effective setup in such an intimate setting.

See some more photos from the show here.