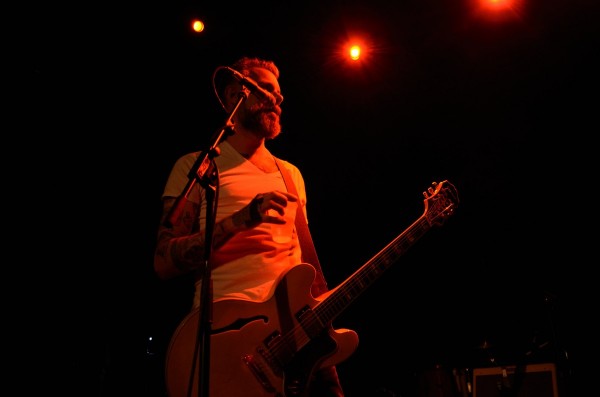 I’m writing this at a mostly empty bar, accompanied only by a pint of Smithwick’s. As I browse through my photos from the night, nowhere else seems more appropriate to reflect on country-punk mainstay Lucero’s performance on Monday, the first show of a three night stand at the Bowery Ballroom, and the first of their “By the Seat of Our Pants” tour.

In the chilly afternoon on Delancey St., I spoke briefly with lead singer Ben Nichols, as he smoked a cigarette. He expressed nervous excitement about the plans for the opening set. Unlike previous tours, there were no supporting acts. The band instead opted to play an acoustic set, with bassist John Stubblefield playing an upright bass, and Nichols on acoustic. Of praiseworthy note was their song selection for the set – with the band choosing to play acoustic versions of songs that are distinctly electric on their albums, such as “That Much Further West” and “Hate and Jealousy.”

Following a brief intermission and visit to the bar with fans, the band returned for their second set of the evening – this time accompanied by supporting a trumpeter and saxophone player. Reflecting the name of the tour, there was no visible set list for the second half. Instead, Nichols admitted that they came in with an idea of what they wanted to play, and sought to interact with their lively fans.

To call Lucero’s fanbase diverse is an understatement.

Among my fellow fans in the front row was a Westchester hipster who napped between sets, with his head down on the stage. To my right was a Baltimore native on crutches, who claims to have broken her foot earlier that morning. The song she requests is, of course, “All Sewn Up.” Later in the evening, during a rowdy performance of “Tears Don’t Matter Much,” a small mosh pit sends me crashing into her. Despite being slightly startled, she smiled and gave me a thumbs up. Behind me, two grizzled Drive-By Trucker fans discussed politics ahead of Tuesday’s elections. Midway through, a drunken fan, who had been moved to tears earlier in the evening, attempted to pay off Nichols into performing the often performed song “Mom,” by throwing a $100 bill on the stage. After a humorous back and forth, Ben pockets the bill and obliges a song later by saying, “I fucking love this city.”

Each member of the band, from Rick Steffs (accordion and piano), to Brian Venable (guitar), and Roy Berry (drums) was featured prominently throughout, and their talents were on full display during an enthusiastic set that encompassed the band’s entire history, and a surprise cover of Jawbreaker’s “Kiss the Bottle.” By the time the final song was played, “I’ll Just Fall,” the crowd left happy – eagerly anticipating the band’s next two nights in the city. As for me, I wandered into the cold of the lower Manhattan night – a Southern boy who had a hell of a night in NYC.