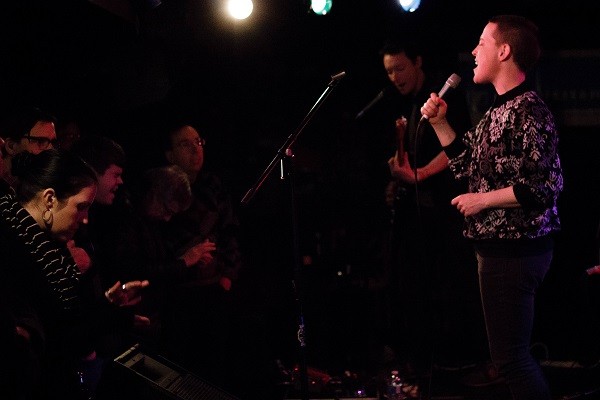 An all new album from Lower Dens is slated for a March 31st release. If you made it to The Space on Sunday night, you got an early listen to how a lot of their new material sounds live.

Accompanying them on tour was the experimental project of Sydney Spann. She operates under the moniker Sunatirene, and like Lower Dens, comes from Baltimore. She set the tone by sitting in a chair off-stage quietly syncing herself with a metronome. She proceeded to unleash eerie beats, looping an assortment of unconventional audio, and incorporating what looked like a small zither-like instrument.

Next up was All the Friends, a group with roots in Connecticut and Northampton, Massachusetts. They combined the conventional indie pop means with some instrumentals that aren’t often resorted to. The interjections of trumpet and clarinet helped make for some quality chamber pop. They played a track called “Sea Turtles” where an orchestral background was noticeable. They’d be even better live if they had even more instrumentals like a violin or something.

We have become acquainted with a pair of records from Lower Dens over the past five years. Their new material is more of departure in a more soft, synthy direction. Escape From Evil carries more notes of new wave with a dark twist from the vocals of Jana Hunter. They performed much of the new album, the set being highlighted by “To Die In L.A.” and “Ondine”, two previously shared new tracks. Beats of repetition and recurring supportive guitar riffs made the rest of their new material sound comfortably dense. The new album should be a blast to listen to when it becomes available.