Lord Huron @ The Space at Westbury 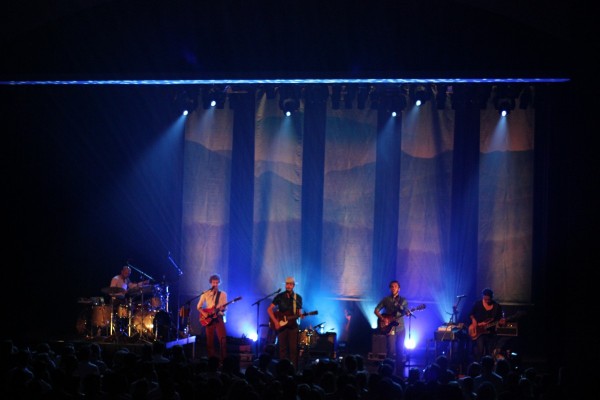 Shortly before Neat Beet was a domain name or even an idea, I found myself at Firefly Music Festival 2013. While I did get a chance to see  two of my favorite rock groups growing up (Tom Petty & The Heartbreakers and Red Hot Chili Peppers) it was a relatively unknown name that struck my interest. Lord Huron is an ambient folk rock group that certainly channeled the vibe of that festival. I also had a few chance encounters with them on the grounds the entire weekend. (one of which consisted of a beer run during MGMT’s set)

A year later, the group’s small venue mini tour made its way to The Space at Westbury. The question was: Can they continue to bring that sound and energy to a significantly more low-key event?

Like Sam Beam‘s performance just a few weeks prior, the show was far from sold out but that didn’t deter the band (or the crowd) from channeling the energy I saw at their outdoor performance. James Apollo opened the evening. He was a man from another time in both his with blues/jazz-inspired folk tunes and on-stage appearance. He was backed by a full band, one that he tenderly referred to as the James Apollo Five. Many of the tracks played were from his recent full length entitled Angelorum.

Lord Huron graced the stage to a very eager yet patient audience. Founding member of the group Ben Schneider stepped aside to let the band’s music do much of the talking, doing little deviation from their discography’s original works other than high energy percussion accompaniments. The set included much of Lonesome Dreams, the group’s debut full length and dove into some of their prior EPs, a unique opportunity I had not been able to see at their festival performance.