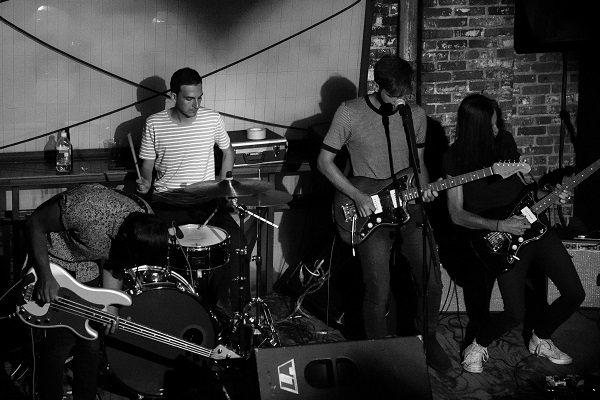 One of our favorite features on Beet Box Radio made the trip from Brooklyn to New Haven to play at BAR a few weeks back. Indie rock group Little Racer performed a set infused with dreamy surf pop. 2015 saw them release their Foreign Tongues EP which is what really kept them on my radar. Singles “Montevideo” and “Jack Knife” exemplify this band perfectly. Tracks like these have smart hooks and comprehensible vocals that are easy to sing along with. Their summery vibes have the staying power that make for year-round listening. Once they are through touring, it would be great to see what this bunch can do in terms of a full-length record.

Local opening support came from Oberon Rose and If Jesus Had Machine Guns. Oberon Rose brought more of stiff rock sound to the show with periods of twisting guitar solos that were very impressive. It was a bit more psychedelic than anything else on the bill, but it was great to see them for the first time.

If Jesus Had Machine Guns takes a more loud, electronic approach. With six members crammed onto the BAR stage, they had everything covered with multiple guitars, a keyboard player, and more. With the multitude of instrumentalists involved, their music still hit you at an audible level. There were those “wall of sound” moments, but they were employed appropriately.

If Jesus Had Machine Guns