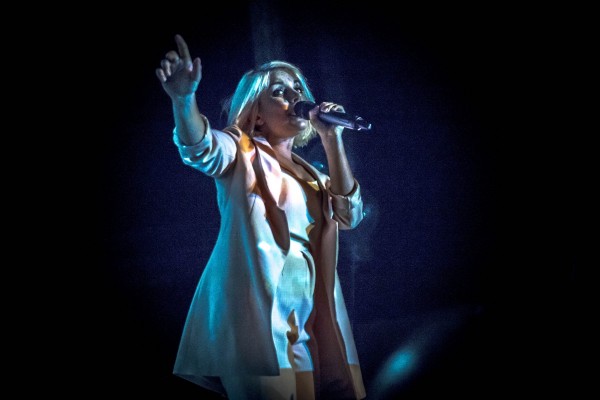 Little Boots is all about getting things done. The English electropop artist just dropped her third album, Working Girl, under Dim Mak last month, which she celebrated with a brief US tour hitting LA & the Northeast. I’ve been aware of her since 2008’s Hands but failed to catch her here until this evening. Needless to say, it was a long time coming for a long time fan and I did not leave disappointed.

Working Girl is the full release that was teased at with 2014’s Business Pleasure EP. Little Boots has adopted a business style of dress for the album’s motif and live shows which are equal parts curious and compelling. Some highlights are “Better in the Morning“, a cozy electropop jaunt which closed out the night and record, “No Pressure” which bears bubbling beats and some “Remedy”-reminiscent interludes, which we also heard remixed at the show’s conclusion.

The main set featured Miss Boots navigating through all three albums, and leading a group including business casual backup dancers and an analog DJ working all the wires and levers. Boots herself can be seen simultaneously working synths/programming, singing, and pantomiming. I wish there a drum kit somewhere in the mix, though I greatly appreciate the effort not to just press play and make it karaoke night; a lot of electronic artists strive to make their performances real, and I can tell that Boots does it better than most, hence the packed crowd at Bowery Ballroom who kept their hips moving amidst shouts of adulation.

Repping Brooklyn on tour with Little Boots was Prinze George. They’re a compelling indie pop act that seems on the verge of being festival ready. Their frontwoman, Naomi Almquist, looked a little uncomfortable during the set, at least juxtaposed with her exuberant bandmates; this was due to some equipment issues, though everything sounded right-on. It makes me wonder what sort of stage presence she has on a good day. The Prinze George EP came out in March and is Beet-recommended listening.