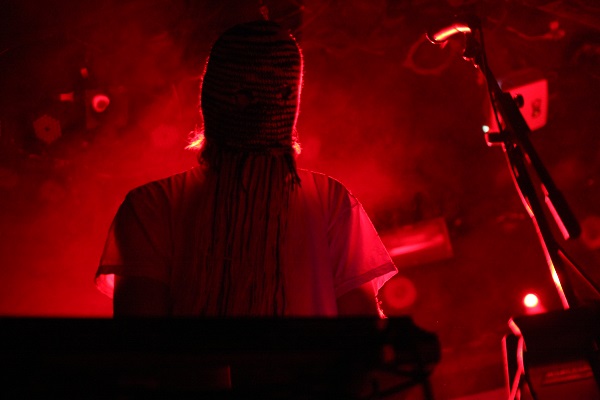 The evening began strongly with the lovely Jana Hunter, Baltimore based singer songwriter of Lower Dens. She provided the perfect introduction for Liars, composed of Angus Andrew on vocals, Aaron Hemphill on percussion, guitar, and synth, and Julian Gross on the drums. Although Liars has successfully avoided being tied down to a genre, in general, their sound can be described as dissonant and primal. As such, Jana Hunter’s psychedelic folk rock provided the proper combination of mellow yet danceable music to warm the audience up without tiring them out before the explosion of beautiful noise that is Liars.

Hunter’s unassuming stage presence, shyly speaking to the audience and almost appearing surprised at her success, strangely draws the audience in and makes the experience feel more personal because Hunter seems to have almost no stage persona at all but simply is herself, a rare and striking thing for a musician. She began her set with a solid cover of Hall and Oates “Maneater” and over the course of the set, Hunter showed off her ability to both sing like an angel and make the guitar whine over driving percussive music reminiscent of Micachu and the Shapes but with folk attitude. Hunter got the audience moving just the right amount before closing her set and making way for Liars.

Liars’ set list was pure gold for my personal tastes, opening with “Pro Anti Anti” off their most recent album, Mess, which begins with an insanely catchy synth riff that immediately inspires you to dance. Angus entered the stage wearing a knit facemask inspired by the album artwork, walking like a possessed soul with his arms outstretched forward, driven towards the sound. The primal chant style vocals further enhance the immersive quality of “Pro Anti Anti” that seemed to put the audience into a hypnotic dance stupor. This song really captures the spirit of Mess in my opinion, which I would describe as disco on a dark dissonant trip to the underworld.

Liars also played songs off Drum’s Not Dead, Liars, and WIXIW, a nice reminder that Liars has had and will continue to have many different sounds. You typically don’t find songs as different as “No. 1 Against the Rush“, a mellow psychedelic electronic number, and “Plaster Casts of Everything“, having a clear punk and noise rock influence, coming from one artist, let alone getting to hear them in one evening. However, Angus’s odd yet perfectly fitting dancing lets the audience know that just because Liars has many different sounds, doesn’t mean they aren’t all great to dance to or move in whatever way you see fit and believe me, there was a lot of crazy dancing in the crowd. Overall, it was a fun evening with two unique artists and perhaps an even more unique audience.

[Drumming for Liars on this tour is Butchy Fuego; Julian Gross is injured. Get well soon! ed.]