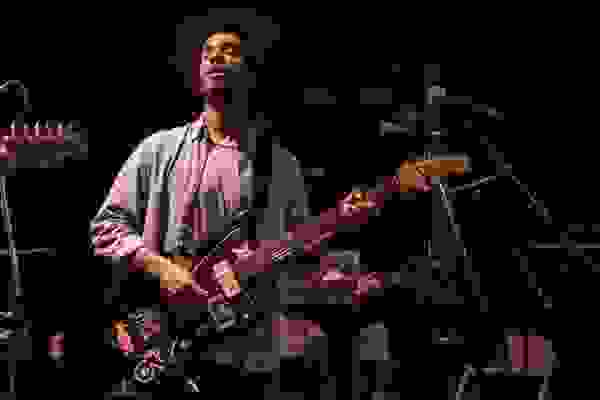 Shea Stadium last Friday was filled to bursting with a five band line up celebrating the release of Leapling’s debut record, Vacant Page. Leapling is Dan Arnes, Yoni David, R.J Gordon, & Joey Postiglione. For this special release show, we also saw a strings quartet, a cameo from Greg & Sam of Celestial Shore and also Pablo Eluchans from Zula, who joined for the full set on aux percussion (shades of Mr. Twin Sister?). Vacant Page is a pretty special release for anyone partial to downtempo, experimental guitar pop.

I was really impressed by Cloud Becomes Your Hand again. The group’s fusion of musical mastery and performance art is like a powder keg, and what you get from show to show seems rather unpredictable. Their set this time around concluded with a programmed dance off and pajama party in the middle of the audience. They feel like the band you might hear playing after being abducted by aliens.

Cantina and Palm were up on the early side, and together represented a dichotomy in their musical leanings. Cantina, the project of Renata Zeiguer (who played violin w/ Leapling & Mr Twin Sis), was an emblem of calmer seas and welcoming tides in her music, which is playfully styled as a tropical apocalypse. On the other hand, Palm, a quartet hailing from Bard College (Young Bugs, Meadowhawks), embodied a loose style of noise rock.

Apologies to Felicia Douglass, who I missed. Those seeking photos of her opening performance should check IMPOSE’s gallery of the night. Another Zula, Noga Shefi, joined her on bass.