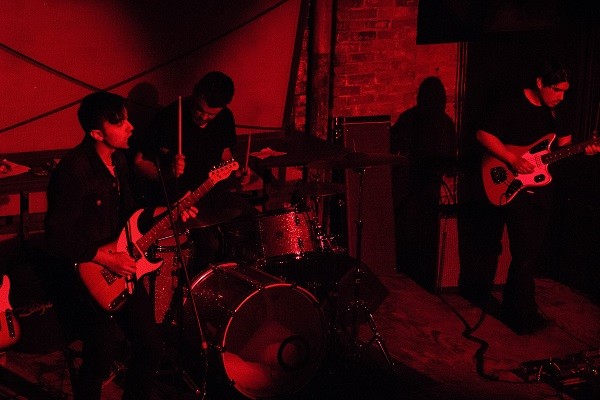 Going into this past Wednesday at BAR in New Haven, I was almost completely unfamiliar with Brooklyn’s Lazyeyes. I left very intrigued and I’m looking forward to diving into their melting pot of genres via headphones.

To best get a sense of what Lazyeyes does so well, listen to their self-released New Year EP that they put out in January. What I got out of them was a strong post-punk influence, sort of Joy Division meets psych rock. There are too many other particular bands to name in this case that could be considered potential influences of theirs. But if shoegaze, punk, and dream pop all appeal to you, their tracks “Windowsill” and “Adaptation” are great starting points. Amidst the instrumental haze, Jason Abrishami totally shredded on guitar and released copious energy riff after riff. They’ve got a date at Brooklyn’s Knitting Factory coming up on June 5th.

At this point, having seen them a few times, I’ve become very acquainted with local trio Spectral Fangs. Their ability to open a show and draw in the early spectators with their lively power pop is already well-documented here. Vocalist/guitarist Joe Russo even threw in a cover of Tears For Fears’ “Head Over Heels” for a good measure, and I’m always appreciative of any tribute to the new wave era.

I also caught the locally hyped Laundry Day for the very first time, and that was excellent as well. They performed a series of brief, moody rock jams that were heavy on guitar led by Alex Burnet and Sam Carlson (also plays drums in Ports of Spain). Their tunes carried a complexity that I need to see again live in the near future. It is great to see so much depth in the local Connecticut music scene these days.