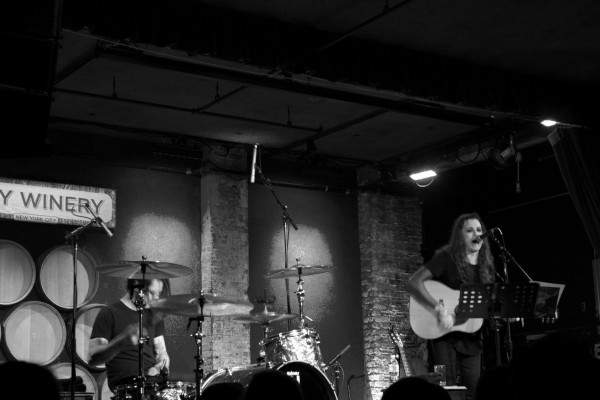 Killing Me Loudly, An Evening of Existential Dread, Fiending and Gender Dysphoria In The Brilliance of Life’s Headlights was a reserved, intimate chance for fans to get up close and personal with singer/songwriter Laura Jane Grace of Against Me! The venue had no standing room, just tables and chairs and an expensive selection of food and wine. Unable to sweat, scream, and slam into other people, the crowd was eager to talk back to Laura while she sang and spoke from the stage. Joined by only Atom Williard, drummer for Against Me!, the two had a few quiet but tense minutes of set-up. Someone from the crowd shouted “HI LAURA!” and the relief was evident. The silence was broken, and the conversation could begin.

The performance was as raw and honest as Grace’s solo shows, held before the release of the album Transgender Dysphoria Blues, and before anyone knew the personal details of Laura’s story. I was lucky enough to see her debut those songs with nothing but an acoustic guitar and chorus of fans joining in on the “woah-ohs” because no one knew the lyrics yet. At City Winery, it was the same type of attentive listening from the crowd, but with a hushed sort of respect for the performance itself. Opening act Globelamp was a witchy acoustic singer, who sang with a wide range of tones and reminded me a bit of Hop Along. While the place was beautiful and certainly enjoyable for any type of event, the space gave the show a very tangible feeling of purpose, like that of a slam poetry event.

Throughout the entire show, Grace read directly from the pages of her diary in a hurried, but commanding tone. Between topics she would play Against Me! songs punctuated with newly revealed meaning behind the lyrics. She told stories from when the band started to get famous, to traveling the world, right down to meeting her wife. All positive experiences, which she was unable to enjoy due to the anxiety she suffered from being uncomfortable with her gender identity. She also recounted in vivid detail stories of suicidal thoughts and depression, owning up to her drug addiction and alcoholism. Often, she threw the pages to the floor, sometimes not referencing them at all and speaking off the cuff. Surprisingly, Grace revealed a few hard truths about the former bassist of Against Me!, who’s departure from the band was sudden and heated. With a dark laugh, she mentioned an interview in which the former bassist was quoted as saying they were “just a bunch of normal dudes in a band.” Grace was met with nothing but support and encouragement from the crowd as she shared the darkness from her past, and her desire for things to someday get better.

Grace mentioned her daughter only briefly towards the end of the performance, followed by a soulful performance of Two Coffins, a dark ballad dedicated to her everlasting youth. Grace also played a cover of the Replacements’ song Androgynous, which she recently covered alongside Miley Cyrus and Joan Jett for the Happy Hippie Foundation, an organization which rallies young people to fight injustice in their communities. As an anecdote, Grace mentioned with an eye-roll that in the early days of Against Me! the cover was used on a demo, which their label didn’t recognize and fawned over the songwriting skills. As an encore, Grace and Willard joined the stage to play Black Me Out and Sink Florida Sink. It was very difficult to not jump around at this point, but the crowd was just as loud as it would have been if this had been a regular show with crowd surfing and a mosh pit.

Never before have I seen the crowd at an Against Me! show so tame, but these fans came out for something different. The thoughts of someone who doesn’t feel real, doesn’t see themselves as a person but more as a jumble of parts that don’t form a whole, are entirely relate-able to anyone who has ever felt like an outcast. Looking forward, it’s evident that Laura Jane Grace plans to turn the pages of her diaries into a novel. She shares these stories not as someone looking back to mourn what has happened, but someone looking forward to piecing it all together in order to live the life she was always meant to live.